Trying to Distract Myself.... 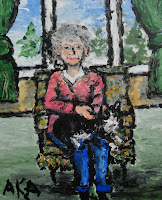 Today was rough on me.

So much snow made me miss Rob and feel sad.

One of my dearest and closest friends has decided to stop working for me after seven years.  I understand her reasons and I respect her decision, but it still makes me feel sad.  We've promised each other to keep in touch and see each other often ... but in my experience these kinds of promises seem to melt away after awhile.

Another friend of mine is worried about her mother who is having heart problems. I like being there for her, I want to be there for her, but it's hard because it brings painful memories of my own mother.

Rob Ford is still in office. He won his appeal.  Bloody hell!  His disregard and absolute disdain for poor, marginalized people makes me want to scream!  One more year of that ignorant, unfeeling loudmouth! I'm  not sure if I can endure such unbearable torture!!!

One more thing before I go onto more positive topics.  I am especially broke these days, so I sent Yuula to the CIBC to get the rolls of coins I had collected over the past few months to get them changed into bills. Simple enough, right?  Not really.  Apparently, nowadays people need to provide proof that they have an account with them before they'll do a simple thing like change coins into paper money. Why?  It seems more time consuming for both teller and client because debit card numbers would need to be punched in before an exchange could be made. Fortunately, Yuula talked the teller out of sending her back to my place to get my debit card and he just gave her the cash instead.

My counselor told me to write about my sadness and grief, and then to distract myself from it. So, that's what I did. First sadness and then drown out the sound of "Time After Time" by voicing some of  my anger and frustration. It worked! I do feel better.

And, while I've been working on this blog entry, I've been playing Scrabble on my iPad and getting fantastic scores. Yay! Plus, I checked my email and somebody from www.cerebralpalsy.org wants to interview me for their newsletter. That's pretty cool!
Posted by Annie's Dandy Blog at 11:05 PM

Email ThisBlogThis!Share to TwitterShare to FacebookShare to Pinterest
Labels: Trying to Distract Myself

I can definitely relate to your sadness of having one of your aides leaving. I have an unique relationship with my aides and from what I've read on your blog, so do you.I develop friendships with my aides while, of course, maintaining professional relationships.
From what I've read on your Facebook page and blog we share a lot of similarities in our lives. I am also nonverbal, college educated,choose to use a communication board. and hire people I consider peers as myh aides. So much of what you write about is so meaningful to me. Thank you for being so honest.