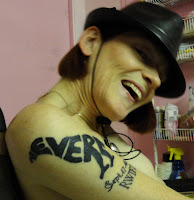 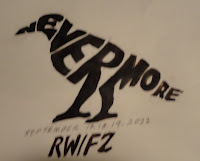 Nothing stays the same.  The more things change, the more they stay the same.  Which is it?  Both, I suppose.  Love; hate; greed\; empathy; lust; sex; birth; death; inventions to improve life, inventions to destroy it; famine; war; fighting over land, religion, differing points of opinion - and everyone scrambling for the simple, never-ending pursuit of happiness.  Different players and environment but, basically, it's the same script.

One other thing that has remained constant throughout time, and yet keeps evolving as well, is a person's yearning for self-expression.  Whether in personal appearance or in deed, people strive to show the world who they really are, and how they view the world in which they live.  Sometimes the mode of self-expression is met with smiles, warmth, and congratulations.  Other times it is met with frowns, ridicule, and downright nastiness!

On Boxing Day, I went and got a tattoo.  It's a drawing of a raven, its body forms the word: "Nevermore". Underneath reads: "Sept 17 18 19  RW/FZ".   (Actually, I have to get it slightly altered because right now it says: "RWIFZ", which is rather ridiculous, as you will see as you read on.)

Why did I suddenly get a tattoo?  What is the meaning behind it?  I'll tell you!

On the Thursday before Christmas, I accidentally clicked on an icon on my Ipad, and what popped up? The photo of me meeting Gail Zappa during my Baltimore trip.  She had been speaking at a fundraiser to save Poe House, and had said that after Frank's death she'd felt as if seven ravens were looking over her, protecting her.  Edgar Allen Poe wrote the famous poem "The Raven", where the word "nevermore" appears repeatedly. The poem speaks of a lost love, his Lenore.

It all seemed so right, so inevitable, that I should get a tattoo of a raven, with RW (Rob's initials) and FZ (Frank's initials), as well as Sept 17, 18, 19.  Those dates, you see, have a double meaning.  In '09, Rob spent his last 3 days in the hospital on September 17th, 18th, and 19th.  Last year, I was in Baltimore, on September 17th, 18th, 19th, for the FZ Festival.  And after searching for two minutes on the internet for images of ravens, I found the Nevermore Raven. Perfect, I thought, it ties everything: Rob, Frank, Poe, Gail, Baltimore, and the tragedy of lost love.  Death=Nevermore....

My friends Dobrila and Yuula came with me when I got my tattoo.  They took turns holding my arm steady while the tattoo artist did the work.  It hurt like a bastard, as I knew it would, but it was also exhilarating to know I could stand so much pain for two hours straight.  I felt so empowered, like I could face any kind of pain head on.  It was cathartic too; the pain of grief still wears heavily, like an albatross, but now I feel I can deal with it better.

For the most part, people have given me positive responses to my tattoo.  Even my 86 year old mother was cool with it.  "Oh, Annie," she said with a smile, "I never know what you're going to do next!"

Other people, however, have made it their personal business to tell me that they think it was unwise for me to have gotten a tattoo.  They bring up the risk of infection, fading, and the general "tackiness" of how tattoos appear.  Rage boils inside me when I hear these things!  It's none of their business!  And, when people say it's ridiculous for me to have a tattoo at my age - watch out!  I detest ageism almost as much as ableism!

All of this prejudice against my tattoo has made me start to wonder: Is my body actually my own to do with it whatever I like or does it belong to society as a whole?  Which is it? Certainly my initial gut reaction is to say Of course this is 100% my body and to hell with anybody who says differently! However, in reality, what I can actually do with my body is limited by the medical system, the laws that govern us, and societal pressure.  Taking drugs, doing sex work, "unnecessary risk taking" (going over Niagara Falls in a barrel, for example), acting "weird" or just seeming to be "out of the norm" can land you in prison or in an institution.

And then there's the media. I can't even count how many shows and movies make fun of people who are over-weight, under-weight, intellectually challenged, are from different ethnic backgrounds, are "too sexually active", have different sexual orientation/preferences, wear off-beat or "un-cool" clothes or have piercings. The negative impact from this judgmental, holier-than-thou attitude is horrific because it 1) shapes people's expectations of how everyone's supposed to look and behave, and 2) it gives society the false idea that it's ok to be mean and judgmental of people who are different from us.

Well, in closing, I'd like to say, Vive le Difference! Don't listen to those judgmental shmucks, be yourself and feel free to express your individuality!

Oh yes, and I dyed my hair red, and I'm going to fix my tattoo so that it doesn't look like I'm saying Rob Warenda is Frank Zappa. Although I have never seen the two of them together...
Posted by Annie's Dandy Blog at 11:38 PM 3 comments:

Email ThisBlogThis!Share to TwitterShare to FacebookShare to Pinterest
Labels: Which is it?
Newer Posts Older Posts Home
Subscribe to: Posts (Atom)