The Days After Hershey (Part II)


Thursday, February 9th ...
My friend Mairead invited me to go watch her and her dance troupe perform at the Harbourfront Centre Theatre.  I gladly accepted without any hesitation.   I was feeling stressed out from too much work and grief.
I was in badly need of a diversion.
The performance was excellent. I was so impressed by the dancers' timing, agility, and endurance.  Amazing!
I'm not sure if people were supposed to analyze the performance or not, but I did.  In the first half of the dance, the three performers pushed; pulled; and tossed each other around.  At one moment they seemed to be assisting each other by pulling one another to a standing and position, or dragging them out of the way. At other times they were pushing each other away or turning their backs on one another.
The second half of the performance was lighter, humorous. Each dancer carried an egg, sometimes multiple eggs.  They balanced them on their feet or other parts of their bodies. Eggs were placed upon their closed eyes and inside their mouths.  Eggs were strewn ałl over the stage and the performers tried their best not to smash these fragile little things, but an occasional accident occurred.
The dance was all about life, I thought. The pushing and pulling of humanity, of nature,  constantly changing from the beauty of nurturing of others to the harshness of pushing each other away in anger.  It's all a continuous beautiful and ugly swirling mess in which we are all dancing. A tender cuddle here, nameless people get killed over there. Beautiful sunshine in one place, a terrifying tsunami in another.
The eggs, of course, symbolized the fragility of life, of our environment. Most of us are respectful of the environment, or at least aware of its delicate balance, but there are those who act like they're taking cartons of eggs and intentionally smashing them to smithereens. Bastards!
I realized many things as I was watching Mairead perform. Although I may feel like all of my anchors are gone (by this I mean those who love me unconditionally and are with me consistently), I am not really alone. I have many people who love and respect me. That's fantastic! I am also a member of this beautiful, ugly, swirling mess. I am part of humanity, the nature that envelops us all. Yes, I have this feeling of being alone, but nobody is truly alone. If only we reached out a bit more.
I also realize that I had the same thoughts and feelings (did I really go through this, did this actually happen?) many times before. Hershey was just the newest surreal experience in my life. It wont be easy but I know the pain will subside. I've gone through so much in my life and I've always come through the other side.
As life changes, so does its tune and I need to find the next rhythm for this dance.
I love you, Hershey!

Email ThisBlogThis!Share to TwitterShare to FacebookShare to Pinterest
Labels: The Days After Hershey (Part II)

The Days After Hershey

Warning! This post may be difficult for some people to read, especially if you're experiencing grief yourself.  And yet, if you're able to get beyond the sadness there's always hope.


That day ...
Did that really happen?  Did I just spend a whole incredibly awful and nerve-wracking day only for it to end even worse, like some fucking rancid cherry on top?
Emotions and memories got all tangled and jumbled up. As I held his furry frame close to me, cooed softly to him, and stroked his paw and head, memories of my mother and of Rob came to me.  Sitting with my mother in the hospital, waiting, waiting for the inevitable end. Rob, almost thankfully, had already passed when I had arrived.

Later ...
Food?  My stomach felt both full and empty at the same time.  Must I eat? I must. I know that I must eat in order to survive.  I must survive not only for myself but for people who love me and depend upon me.
Emailing, scheduling my employees, doing the payroll, and training a new person - it all seemed too much to handle! And yet, I did it all because of the reasons mentioned above. I also finished the three paintings that I had been commissioned to do for a show next weekend.  Plus, I went to the St. Lawrence Market two days after Hershey's death.
Life continues to go on no matter what.

Counselling day  ...
A torrent of tears fell from my eyes as I tried to unravel and understand the emotional mess I was feeling.  Like my mother and Rob, Hershey had emotionally branded me as his. I felt torn up inside: sad, angry ... lost.
All of my anchors were gone.
Afterwards, I had a lemon loaf and a frappuccino with Alana at Starbucks and that cheered me up a little.
Brittainy and I had dinner at Sambuca's, and that made me even more happy, especially since an old friend of mine, whom I hadn't seen in ages, came up to our table and started reminiscing about the first time we had met twenty years ago.
Memories of that particular evening, from ages past, flooded my mind, and I found myself smiling and chuckling.  I remember I had been selling my note cards to people all up and down Church St. That's when I met Paddy.  She had bought a package of cards, and she and her friends liked me so much they took me out drinking.  I don't think they had ever assisted a person to get drunk before because they called Rob as soon as I started coughing a bit.  Rob, in his usual matter-of-fact tone, said, "Yeah, she does that.  It's nothing to worry about."

Email ThisBlogThis!Share to TwitterShare to FacebookShare to Pinterest
Labels: The Days After Hershey 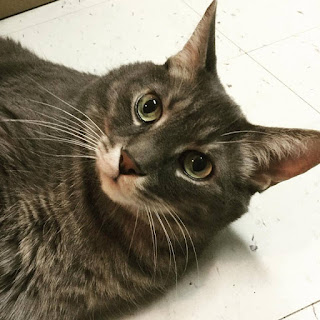 It is with tremendous sadness that I need to tell everyone, that yesterday at 6pm, because of a massive tumor on Hershey's thyroid, I had to put him to sleep. I was with him right until the very end, and I'm very glad I could give him love and support in his last few hours. Like his name suggests, he was such a sweet cat and I'll never forget him and never stop loving him.

Rob had named our other cat Rascal Houdi after a song by Max Webster.  I struggled to find an appropriate middle name for Hershey.  Hershey Kiss?  No ....  Hershey Penn (after Penn & Teller)?  Naw.

(Yes, I know, this is sounding corny and maudlin, but I promise you that there's some cute pictures ahead.  Plus, give me a break.  I just lost my cat and I'm drinking Scotch and feeling sorry for myself.) 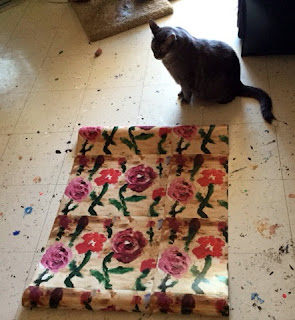 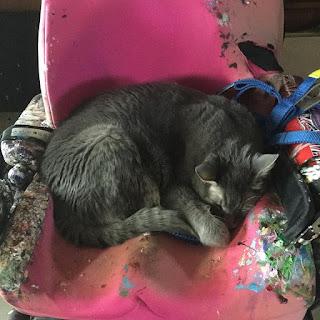 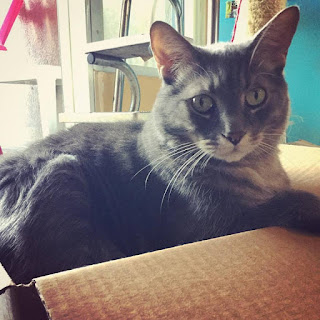 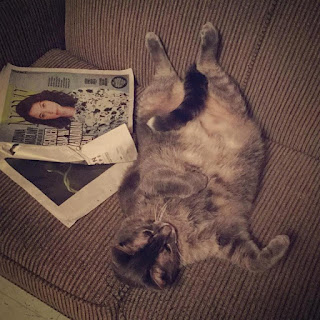 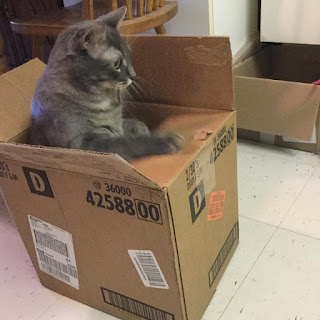 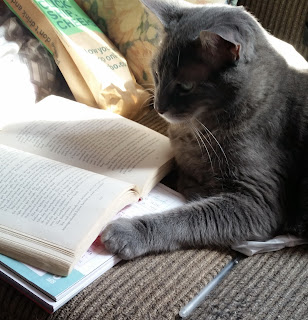 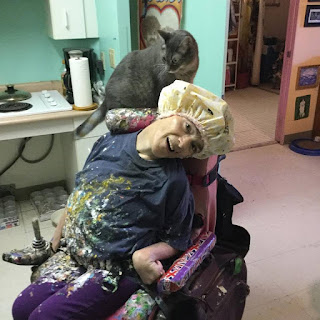 I love you, Hershey! And, I honestly think that you felt the same about me. You were funny and clever and sweet. I'll never forget how you carried your rainbow string and sang to it or how you could open doors. You were an amazing cat and friend. Most amazing of all is that you actually forgave me for running you over as a kitten. But we had almost 11 fantastic years together afterwards.

If there is an afterlife and you run into Rob please say hi and give him a nuzzle for me. 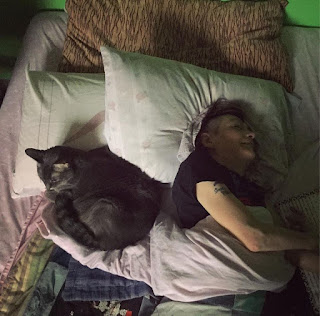