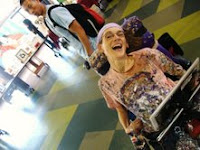 Ok, so I'm a week late - but PawsWay (the Art of the Pet Event) was fantastic!

The other artists were both friendly and suppor- tive. And, the people who worked at PawsWay were amiable and wonderfuly helpful. If Curtis or Motria left for a personal break or to get me some food, the workers would immediately step in and help me sell my work. Amazing!

There were dogs all over the place. Both the artists and customers were allowed to bring any pets they had. PawsWay, you see, is also a teaching centre where people can learn how to take care of their furry loved ones.

I did very well over that weekend. Lots of sales, much praise for my artwork, a few possible commissions. All in all, a very possitive experience!

Plus, the workers said that PawsWay would have this event every 4 months and that they would promote both it and all of the artists. They asked me if I'd like to come back, and I replied with a resounding yes!
Posted by Annie's Dandy Blog at 7:36 PM 2 comments:

Email ThisBlogThis!Share to TwitterShare to FacebookShare to Pinterest
Labels: PawsWay 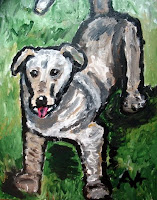 For those who are interested, this coming weekend I'll be at:

And, to pique your curiosity, here are just a few of my artwork of adorable pets...

I hope to see you there!

TTC:
From Union Station: Take either the 509 Exhibition or 510 Spadina Streetcar west from inside Union Station (exit subway platform and look for streetcar signage)

Both the 509 and 510 Streetcars stop directly in front of Harbourfront Centre. From Spadina Station: Take the 510 Streetcar south and get off at the Rees Street stop on Queen's Quay.
Posted by Annie's Dandy Blog at 2:06 AM No comments: 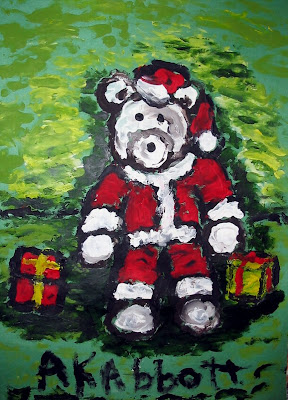 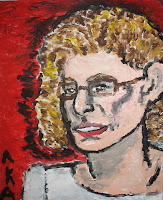 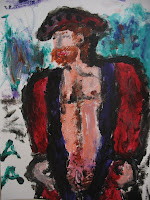 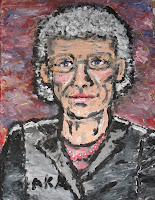 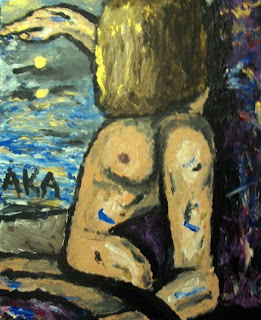 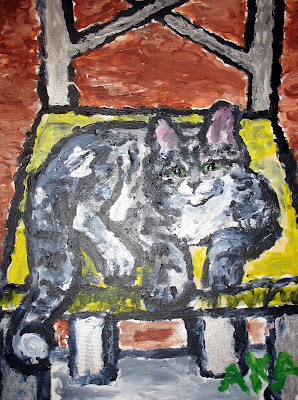 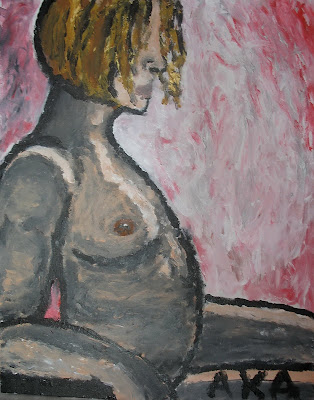 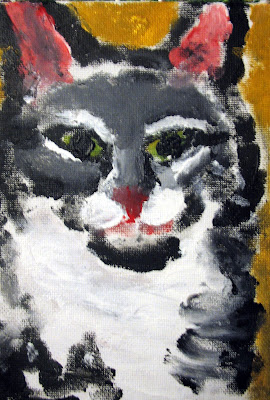 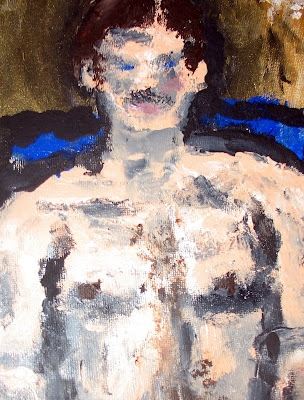 Like I said in my last entry, I am the definition of a "starving artist" personified.

So, I thought I'd put up a few of my paintings here and see what happens. Yes, it's a shameful show of self promotion, but what the hell, I've never been accused of being a shrinking violet! 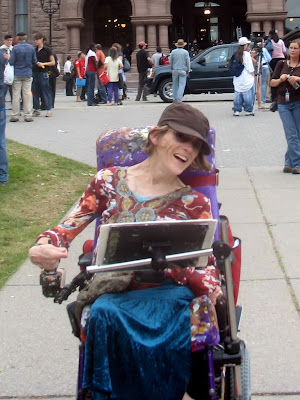 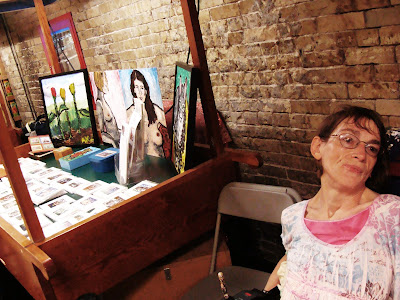 Do you ever have one of those days... er, weeks... er, months? Times when you feel like you're on an emotional rollercoaster?

Upon my return from England, I heard about my dear friend Aaron having cancer, which is so unfair! Why must such a terrible thing happen to such a sweet, unassuming guy?

I had two of my employees quit on me, and others who wanted their shifts switched around. (I understand that people's lives change, and dealing with this type of thing is just part of having Direct Funding and being able to choose who works for me - but, god, sometimes I feel like in scheduling hell!)

Rob's easy chair is falling apart. The front left wheel
on my commode still hasn't been repaired yet. In fact, there hasn't been any OT person visiting yet to do an assessment of the problem. It's kind of a race now to see if Rob will get a new easy chair before I get my new commode. My bet is firmly on Rob.

My mother very, very kindly has offered to buy us a new easy chair. My mother is a wonderful woman!

But I can't. Sales at the St. Lawrence Market has been absolutely dismal. Look up "starving artist" in the encyclopedia and you will, most certainly, see a picture of me.

Next weekend, I'm going to be a vendor at Queens Quay Pet Show, which I'm very hopeful about! It replaces my hope about the consulting job at Bloorview Kids Rehab. I recently heard that this project doesn't start until Spring '09!

On Thursday Lenny and I went to a workshop called "A Call to Action to End Poverty for People with Disabilities in Ontario: Imagine an Ontario where no one ever went hungry and where everyone was treated with dignity and respect!" It was hosted by ARCH Disability Law Centre and Disability Studies in Toronto.

The email they sent me as an invitation to the workshop intrigued me: "The Ontario Government has announced that it will develop a poverty reduction strategy by the end of 2008. Public consultations are being held across Ontario. We want to make sure that people with disabilities who are living in poverty get consulted and are actively involved in efforts to end poverty in Ontario."

Was the government finally going to do something about poverty, especially poverty in relation to people with disabilities? I was reservedly hopeful.

There were about 25 there, and we were all saying how insane it was for the government to expect people on Welfare to rent an apartment for $350.0o. People with disabilities, like me, who receive the meagre ODSP monthly pension were all saying the same things: 1) we should get an increase in funds so that we're not living below the poverty line, 2) ODSP should not penalize people for receiving monetary funds from friends and family (such a practise traps us in poverty forever), and 3) we should not have our meagre funds scrutinized every year by ODSP; it's a truly humiliating experience! And, if we send in our taxes every year, why must ODSP scrutinize the little money we have?

We were asked what would we do if we didn't live in poverty. Right away, I said I'd get out of subsidized housing and get a bigger, nicer place. (I hate the fact that I have limited choice of where I can live!) Other people said that more money would mean being able to buy healthy food for their families, or to take a yearly vacation, or pay for childcare. Nobody suggested anything outrageous like caviar or diamonnd rings. We all just wanted to have a better life and live with some dignity.

The workshop made me feel good - empowered! And yet, I doubted whether anything would happen... within the near future anyway. And, with the election coming up, I'm even more doubtful. When elections come up, people with disabilities (and other minorities) are forgotten.

And yet, I have to have hope. I have to keep fighting, fighting to have my voice heard and change things for the better.

Well, I feel better now. Pouring my guts out in prose always helps. It's very theraputic for me. I'm neither sad nor overjoyed, just resigned and determined.
Posted by Annie's Dandy Blog at 7:07 PM No comments:

Email ThisBlogThis!Share to TwitterShare to FacebookShare to Pinterest
Labels: Split in Two


What a day! We had water pouring down from the apartment above us into our toilet. (We've been complaining about this happening for years!) That was
just the beginning.

I had one more trouble today, although it sounds pretty petty in comparison with the last thing I said ....

The wheel on my commode/shower chair is very dangerously close to coming off. As you can imagine, this chair is very important to my sanitary needs, so I was kind of in panic mode. I had Motria call HME (Home Medical Equipment) first to ask if they could either fix the wheel or give me a whole new chair.

Unfortunately, they told me that I should call ODSP first to get authorization from them before anything work could be done. So, Motria and I called ODSP, and Motria spoke for me. The woman at the ODSP office was impossible - and ignorant! She kept asking if she could speak to me, and Motria kept trying to explain that I was non-speaking, it was part of my disability. The woman still didn't get it and actually asked Motria, in a low, whispering voice, "Is she deaf and dumb?" Deaf and dumb? How offensive! And even more so when that woman is supposed to be working for people with disabilities.

I have more to say - a lot more - on the subject of ODSP and all the complications that arise when you try to get something important to you fixed or replaced. Unfortunately, I have to go to bed. I have to get up at 5:30 am to go to the St. Lawrence Market.
Posted by Annie's Dandy Blog at 3:58 PM No comments: 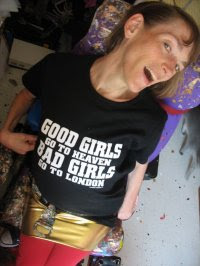 I'm back, folks! Back in good ol' Toronto, and ready to take on the world again.

Admittedly, I was incredibly depressed when I returned home. I had felt connected to England (and I still do!) and yearned to return there. Why do I feel this way? Because of my heritage, I've always felt more British than Canadian. And, because London was more accessible than Toronto, and their citizens seemed more respectful and knowledgeable in regards to disability issues, I inwardly groaned at the prospect of coming back here and fighting the good fight again for change. Don't get me wrong. I love a good fight, especially when I know it's for a good cause, but god damn it, sometimes it feels like I'm banging my head against a wall. Sometimes I feel like I'm pushing against an immoveable boulder.

Yes, at first I was depressed upon my return. Now, I feel like I'm back on track again. Painting, selling my artwork at the St. Lawrence Market, visiting with my mother, drinking Iced Caps. Usual stuff, sure, but exciting things are happening, too! Next week I'm going to a workshop for people with disabilities on how to end poverty. (Many people with disabilities who receive the ODSP government pension live below the poverty line.) I've been asked to act as a consultant for a project that Bloorview Kids Rehab is doing. I can't talk about specifics, but it involves children who use AAC. And, there's a slight chance that I might go to Berlin next year through a disabled activist exchange program.

Oh yes, and all week I've been working hard on updating my Cafepress store. Now, not only can you buy prints and cards with my artwork on them, you can also get notebooks, keepsake boxes, clocks, cushions, teddybears, ceramic coffee mugs etc. If you're interested, check it out! http://www.cafepress.com/adnaa
Posted by Annie's Dandy Blog at 11:19 PM 1 comment: