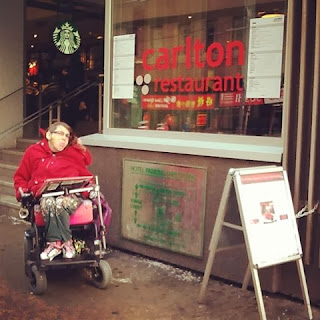 Last night, after Motria went home, I decided to go to the Drug Mart to pick up some of my prescriptions and get in on any deals they might have on chocolate.

Before we left, Dobrila and I waited at the elevator.  As we waited, one of my neighbours came out of her apartment and stood with us.  I immediately smiled at her because, although I barely knew her, when I had run into her (figuratively speaking, of course) previously she always treated me with respect.

This time was no different.  She smiled back at me and asked me if I was still painting.  She, too, had painted herself once, she explained to me.

I had been excited about going to dinner with my friends at the Holiday Inn restaurant on Christmas day.  They advertised a turkey dinner for $25.00, including dessert.  I missed my mom's turkey dinner and thought this would be a good substitute.

The soup was ok, the turkey and stuffing were like cardboard.  However, the worst thing about the meal was how the servers kept refering to me in the 3rd person. "What would she like?" they asked my friends about me. Or, "Would she like her next course?"  Each time they did this I gritted my teeth and fumed inside, but I kept quiet.  I did this because I was with friends andI was enjoying their company, and I didn't want to make a fuss and ruin the evening.  In the end, I got my own back by giving them the tiniest tip.  Unfortunately, they did not notice my rebellious move.  Instead as we were leaving, one of the servers came right upto my face and spoke loudly,"I hope you had a wonderful time, dear!"

I am angry, not only at the servers but also at myself for letting this behaivor go unchecked.  I am also angry that I should be made to feel happy and grateful when somebody shows me respect.

It's 2013 (almost 2014!) - why haven't some people caught up with the fact that people with disabilities are just like anybody else and should be treated as such!  I don't get it, I just don't get it!  The servers saw me communicate with three of my friends, they must have noticed that none of my friends were talking loudly to me, or talking about me in the third person.  Why couldn't they have simply followed suit?

I am going to write to Holiday Inn and tell them how I was humiliated by their staff.  Beleive me, I've written this type of letter many times before - more's the pity!

I am not sure if I have the power to do this, but I would love it if people boycoted the Carlton restaurant in the Holiday Inn, or go in and tell the servers what ableist schmucks they are.

That would make me happy!
Posted by Annie's Dandy Blog at 9:25 PM

Email ThisBlogThis!Share to TwitterShare to FacebookShare to Pinterest
Labels: Ready to Rant