Tim Hortons Why Hath Thou Forsaken Me? 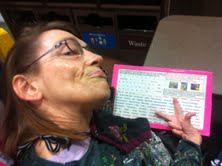 When I first started writing this blog, I confessed to being obsessed with Johnny Depp, cats, and Tim Hortons' Iced Capps.  Of the former two my devotion remains constant.  Of the latter, however, my love is wavering ever so slightly.

Sure, Iced Capps are still yummy and one of my favourite things to consume.  And yet, more and more, I've been going to Starbucks.  Traitor, you say!  Yes, I know, I know.  It's just that my Tim Hortons (my usual hangout spot), the one in the basement of College Park, recently did renovations.  Very bad ones, to my way of thinking!  For one thing, they've taken out most of the tables and chairs and made this huge space where their customers can make up four separate line-ups in order to get their coffee/snacks.  To me, this is like they're saying, "Give us your money and then get out!"

I can deal with that, though.  It's annoying and rude, but at least it's not aimed at me nor at people in wheelchairs - everyone is targeted!  What really made my blood boil was when Sarah and I met up at Tim Hortons for our Monday afternoon snack and we both saw that there was designated seating for people in wheelchairs - right beside the garbage/recycling receptacle!  I don't mean a foot or two away, no! I was practically on top of it, for goodness sake!  Also, the table was situated in such a way that only one person in a wheelchair could sit at it.  One side was free, the other blocked off.

As a person who has been denied access of buildings because of stairs all her life, who has been told that she can't sit at ringside to watch wrestling or go on fast amusement rides like her friends because of "insurance reasons," let me tell you this recent development feels like yet another slap to the face! I'm no different than anyone else, and yet, restrictions are always placed upon me (or people like me) just because I'm "different" somehow.

I'm temped more and more to make Starbucks' Peppermint Mocha Frappucino my drink of  choice.  Sure, it costs a  bit more, but it's worth it not to give a franchise that the best place to seat a person like myself is right beside the garbage!
Posted by Annie's Dandy Blog at 10:11 PM

Email ThisBlogThis!Share to TwitterShare to FacebookShare to Pinterest
Labels: Tim Hortons Why Hath Thou Forsaken Me