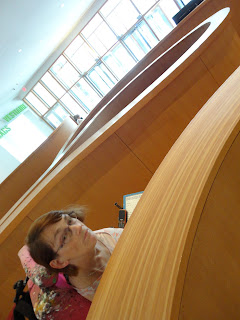 On June 24th of last year I wrote about the ramp at the AGO and how much I despised its mere existence.  I don't usually re-visit my rants in this blog, but I this particular topic needs to be addressed again.

Recently, I found out that the AGO had known about my blog and had, indeed, read the entry in question.  Their response, I`ve been told, was one of fear.  They were afraid of the repercussions that my words of frustration and fury might bring upon their heads.  (Apparently, some of my fans had tweeted the link of the entry about my hatred of the ramp directly to the people at the AGO.)

Sadly, nothing happened, despite the tweets and the conviction of my words, and despite the fact that my friend Aaron had voiced his disapproval of the terrible design when they had invited him to its Grand Unveiling.

Yes, the ramp is still there, all shiny and smooth,  tall and curvaceous. It still hides me from other customers as I slowly ascend or descend the steep, winding ramp.  I feel anger and humiliation knowing that people who are able to walk can use the stairs faster and with greater ease.

One of my friends tries to argue that the ramp is an art piece.  Maybe she`s right.  However, if this is so, then I say make it into an actual exhibit and give it the ironic title: ``Accessibility``.  So many things are designed for people with disabilities, and, for the most part, without our consultation or input.  It is because of  this arrogance of designers and architects and people who dream up convoluted social programs, that we are hidden away, our progress is impeded or halted before we can even begin.

It`s true that I took being snowbound with a grain of salt.  However, deep down, I fumed! I lost money because I couldn`t get to the market because of  the sidewalks weren`t shoveled properly and the curb-cuts weren`t cleared at all.

I`ll keep plugging along, doing my thing, and wishing with all my heart that my words will carry weight enough to evoke positive change.
Posted by Annie's Dandy Blog at 11:40 PM

Email ThisBlogThis!Share to TwitterShare to FacebookShare to Pinterest
Labels: Snow and Ramps