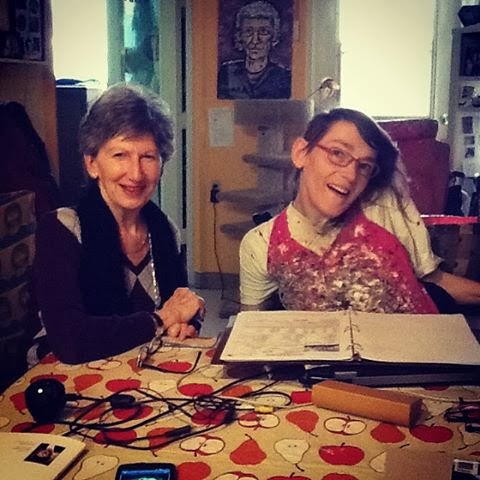 It's funny how life goes sometimes.  It's weird how huge and yet small the world actually is ....

A few months after my mother's death, I had lunch with Rob's cousin Dianne, and I mentioned to her that one thing, down the road, Bruce and I would have to do would be to put Mom's condo on the market.  Dianne, a real estate agent herself, told me that she knew this other real estate named Susan who did her work out of Scarborough. Since Mom's condo is in Scarborough, I thought that this was a good idea.

About a few days later, Dianne emailed me and told me that she had been in touch with Susan, and Susan said that fifty years ago she had known a small child named Anne Abbott. She had been a teachers' assistant at the Ontario Crippled Children's Centre - the same place where I had been schooled for three years of my childhood!

Susan and I began an email correspondence, and she was pleasantly surprised that we'd reconnected after so many years.  Did I remember Susan?  Not really.  I was around four or five at that time.  But I did think it was cool that, just by chance, my late husband's cousin knew a person who taught at my school waaaaaay back when!

Honestly, our email correspondence didn't go very far because I wasn't emotionally ready to put Mom's condo on the market.  I'm still not 100% ready, but I feel that it's time to get the ball rolling.

Today was the first time in fifty years that I'd met Susan face-to-face.  I think I vaguely remember her but not fully.  She came over this afternoon, and we discussed the possibility of Susan selling Mom's condo, and what first steps we should take.

I like Susan, and I think our partnership in this endeavour will work very well.

It's funny how life works out sometimes ....
Posted by Annie's Dandy Blog at 7:34 PM