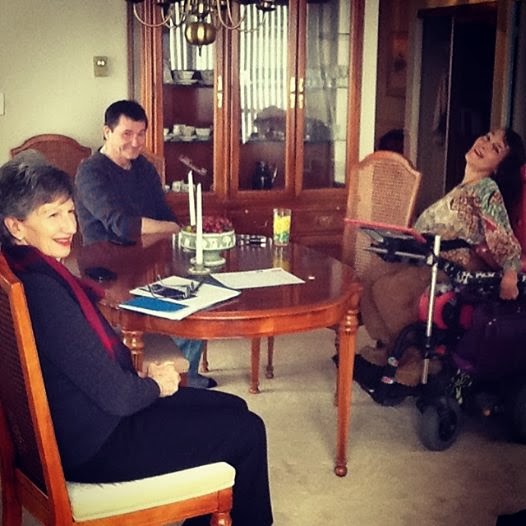 Thank you, Wheel Trans.  Thank you for distracting mefrom a potentially difficult and sad day for me today.  (Certainly, way down deep there was some sadness inside of me.  How could there not when Bruce and I were signing papers and discussing the best way to proceed in putting Mom's condo up for sale?)

Instead, I felt tremendous anger and humiliation for most of the day.  For one thing. Wheel Trans was forty minutes late, for which they never apologized.  I say "they" because there was one regular driver and the other one was a trainee.  As I was getting on the bus the trainee asked me if I wanted a lap belt, and I thought that was odd because I'm never asked this question until I'm setttled into my spot. Annoyed that she was asking me a question while I was trying to concentrate on driving my chair, I shook my head no.  Once in my spot, she tried to give me a shoulder belt, but I refused because I can't move properly with one on.  So then, the regular driver tried to convince me to at least wear a lap belt, and I refused because I always wear a lap belt when I'm in my wheelchair.  Unlike other drivers who usually shrug and say, "Ok, it's up to you," the regular driver wouldn't let up.  She tried to scare me and told me that if we were ever in an accident, my chair would fold up on me because my own belt wasn't tied to the actual bus.  And then she said "Alright, but I need to write you up for this."  I thought to myself, "Am I in school?"

All the way to my mom's condo I kept fuming about the regular drivet's remarks.  I mean, on TTC buses, no one wears belts. And no one gets a lecture from the drivers either. In fact, when a person in a wheelchair goes on a TTC bus they can choose to have their chair tied down or not.  I don't get it, Wheel Trans is supposed to be for people with disabilities, which means they shouldn't only support us in our transit, but also in our decision making.

But the straw that broke the camel's back was when we got to my mom's condo and they opened the back door of the bus, and I automatically started going forwards, not backwards.  (I hate backing out of the door of a bus because I can't see where I'm going!)  The trainee started trying to convince me to go backwards but I just ignored her because I've been riding on Wheel Trans for over thirty years, and I know how to get on and off a bus! Well then the regular driver actually started yelling at me, "Anne! Stop it and turn around! Anne! Stop it and turn around!"  I ignored her rantings and got off of the bus myself, in my own way, and went straight up to the condo's doors - no problem!

On my way home I had another driver, and he asked me if I wanted a belt, and I said no," because I already had one on my chair.  He didn't lecture me or say he was going to write me up.  However,  he did talk about me in the third person to Yuula, and asked if I was deaf.

Email ThisBlogThis!Share to TwitterShare to FacebookShare to Pinterest
Labels: Thank You, Wheel Trans