Today I gave a speech outside of the Ministry of Finance.  I, like many others, talked about ableism, the continnuous frustration over the meagre amounts of money we receive from ODSP and OW, and the need to stop the government from merging ODSP and OW. 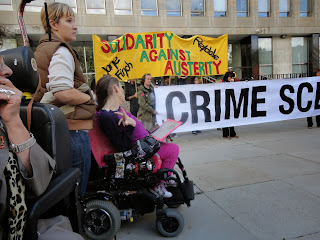 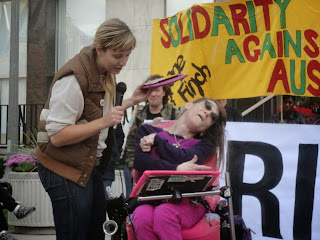 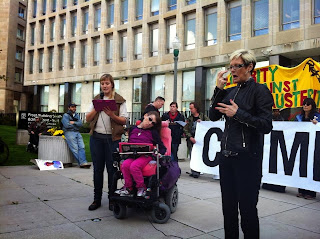 Here's the speech I wrote:

My name is Anne Abbott, and as many of you know, I’ve been a disability activist for years and years. I fight for the rights of my peers, and I will continue to do so until there are positive, rock solid, changes put in place by the government.

I will admit that fighting for our rights can be emotionally hard, draining, and very frightening.  A lot of people with disabilities are afraid to speak out against what’s wrong and ask for even the barest of necessities.  And then there are those who want to join in on the rallies and demonstrations so that their voices can be heard, but, because of either physical or environmental limitations, this simply isn’t possible.

As I worked on this speech, I looked up many instances of blatant ableism throughout history.  Did you know that in 1933, the German government put into effect the “Law for the Prevention of Progeny with Hereditary Diseases.”  This law called for the sterilization of all persons who had conditions, such as, mental illness, learning disabilities, physical deformity, epilepsy, blindness, deafness, and severe alcoholism. Because of this hateful law, Germany felt that it could step up its propaganda against the disabled, by regularly labeling them “life unworthy of life” and strongly suggesting that they were a burden upon society.

But Canada, too, had its own brand of eugenics.  In 1928, the Legislative Assembly of Alberta enacted the Sexual Sterilization Act which was created to eventually eliminate people with mental illness, developmental and physical disabilities, as well as people who were “paupers”.  At first, it was voluntary, but then in 1937 it was actually amended to be mandatory. That act didn’t get repealed until 1979. That’s absolutely disgusting!

Now, even though banks and big corporation are to blame for much of the financial disaster, governments are trying to point the finger of blame upon poor people and people with disabilities. In Britain a lot of the conservative members of parliament have brazenly admitted that this is their opinion and have made brutal cuts to the already meagre disability allowance. This, as well as the mandatory rule that everybody must re-apply, is putting many people out on the streets and causing thousands of deaths.

I’m not afraid to say this - the merging of ODSP and welfare terrifies me! When they decided to bring back the Special Diet funding, what did the government do? They forced everybody to re-apply, and in doing so, they weeded out a lot of people who both needed and deserved the money. If ODSP and Welfare merge, you can bet your bottom dollar it will be mandatory that everyone must reapply. If this happens, we will be in the same horrible mess that Britain is in.

We must stop this before it begins! We must tell the Finance Minister and other members of government that we won’t let this happen! We are already living way below the poverty line, which is humiliating enough without having the silent threat of cuts and reapplying. This cannot happen!

It was a very good rally, and I felt so gratified when people kept coming up to me and saying how much they liked my speech.  I did so much research for my speech and found the information horribly fascinating!

Interestingly, once the rally was over, I went to another rally at Queens Park and ran into my friend Leah.  I let Leah read my speech, and after she read it she told me a story that really shocked me!  Like me, Leah had been researching eugenics and found out that in 1909 the state of California had an eugenics program, where they attempted to eliminate people who were genetically "undesirable", such as poor people, immigrants, people with disabilities, and alcoholics.  This program was funded by charities, and continued until the '50s.  In the 1920s, the heads of the program actually suggested to Germany that they try eugenics out, but Germany declined, saying that it didn't think its people would be agreeable to it.  Unfortunately, Hitler was a big fan of California's eugenics, and thus, implemented it when he came to power with horrific results.

Email ThisBlogThis!Share to TwitterShare to FacebookShare to Pinterest
Labels: Raise the Rates Rally