The Speech for This Evening 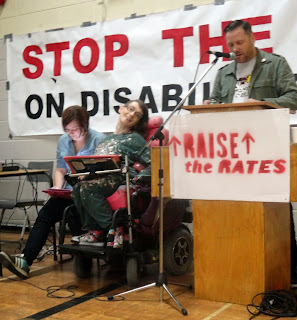 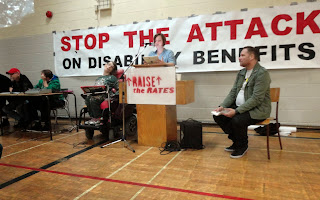 This is the speech I jus gave at the Town Hall:


As many of you know, I’ve been a disability activist for many years.   I joined DAMN (Disability Action Movement Now!) around the same time as I joined OCAP.   Like ADAPT of the USA, where members got out of their wheelchairs and crawled up the steps of the Capitol Building to demonstrate the inequality; segregation; and inaccessibility within their country, I was drawn to DAMN’s mandate of direct action to evoke positive change.

Especially in recent years, people with disabilities have had to speak louder and demonstrate more to make the government recognize that we are here to make them accountable for any type of unjust, bureaucratic garbage they try to throw at us!  And believe me, the government has thrown a LOT of garbage our way!  They’ve scrapped the Special Diet, only to reinstate it and forced people to reapply.  They’ve cut the funding to the Community Start-Up Program.  They’ve kept people on ODSP living below the poverty line for way too long! And, if people on ODSP ever do go over the poverty line, even by just a tiny bit, they are penalized for it by having their already meagre funds cut!

I’ve been on ODSP for most of my adult life, and let me tell you, it’s extremely demoralizing!   People simply want enough money to feed themselves and their children, to pay their bills and rent, and to stay healthy.  Isn’t that a reasonable ideal to have?  We don’t want caviar or diamonds, we just want enough money to put food on the table and to be able to survive in this world.  That’s all!  And yet, ODSP gives people barely enough to live on.  Most months, for many people, it’s a hard choice between paying rent or being able to eat.  Do ODSP workers care about how people struggle?  No!  They sit across from recipients grim-faced and judgemental, poring over bank statements and looking for the tiniest discrepancy that they can pounce on.

Things for people on ODSP may be about to get even worse if the government goes through with their plans to merge ODSP with OW.  I remember when the government brought back the Special Diet funding, they forced everybody to reapply and in doing so they weeded out a lot of people who both needed and deserved the money. If ODSP and OW merge, you can bet your bottom dollar it will be made mandatory that everyone must reapply. If this happens, we will most likely end up in the same horrible mess that Britain is in.  Because of the deep cuts to Britain’s social programs, disabled people are dying by the thousands from starvation.  They are being put out on the streets because of being unable to pay their rent.  Things are so bad in Britain right now that the UN is trying to step in and put things right!

We can not let things get that bad here!  We can not let the merger of ODSP and OW happen!  The MPs must be persuaded not to vote in favour of the merger and be made to understand that this would be the worst thing that could happen to the disabled people of this province.

People liked my speech, which was gratifying.  I really liked other people's speeches, too, and found what they had to say to be extremely interesting! For example, there was a guy from a group called ODSP Action Coalition and he said something that really surprised me, and that was that there were some members who were actually ODSP workers - and they were dedicated to promoting positive changes for recipients!

(Who knew that not all ODSP were grim-faced, judgemental creeps?!)

Mostly, I feel happy and hopeful about the outcome of the meeting.  There was an air of optimism and determination.   I could almost hear Twisted Sister singing "We're Not Gonna Take it Anymore!"

Email ThisBlogThis!Share to TwitterShare to FacebookShare to Pinterest
Labels: The Speech for This Evening