A Day Full of Promise

All in all, it was a pretty good day at the market, despite the fact that I had only gotten maybe four hours of sleep.  (My cats kept fighting on my bed, which, of course, periodically woke me up.)  I made $79.00 - which is better than a swift kick in the behind!

I also received a beautiful bouquet of tulips from a fan - the same person who had given another bunch of flowers a couple of months ago! 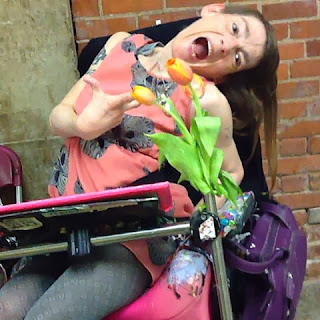 My customers were more friendly and chatty today. Some, because they liked my artwork and wanted for me to get more exposure, gave me a few suggestions where I could show/sell my work online. 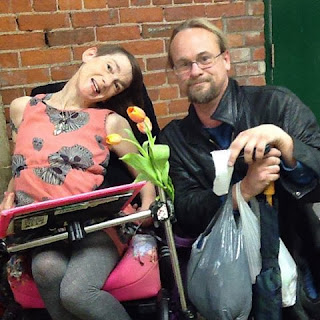 One of these people was an old friend named Mike Harris. I call him The Good Mike Harris Not the Evil Mike Who Plunged the Most Poor, Marginalized People in Ontario into Deep, Fathomless Poverty.

Mike is the manager of Show Gallery.  I used to have a showing there every year until the gallery got very busy and so did I. Mike said they didn't hae very many artists these days and I quickly offered myself. So we made a tentative agreement that I could show my artwork there in January! 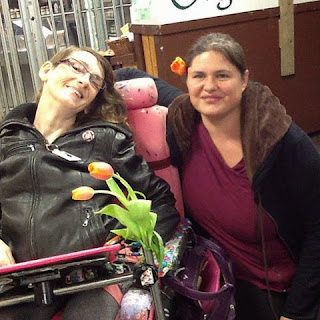 As I was heading out I talked to my friend Andrea who runs the salt store and I casually mentioned that I was running home to do the payroll for my employees. She gave me a brilliant idea and told me she does her employee payroll in Googledocs. She said she gets all her employees to enter in their own hours and it automatically calculates what each employee will get paid. I love that idea! It sure would get some of the work off me!

I'm so happy! I'm dying to try out some of these suggestions! However, right now I'm going to bed.

Hopefully, the cats won't fight on my bed tonight!
Posted by Annie's Dandy Blog at 11:01 PM

Email ThisBlogThis!Share to TwitterShare to FacebookShare to Pinterest
Labels: A Day Full of Promise