Lots to Celebrate and Think About

Happy Civic Holiday!  That's what I thought as I sat in Starbucks on Church, consuming my double chocolate brownie and peppermint mocha frappuccino. 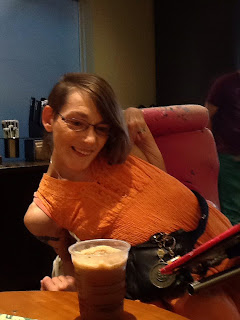 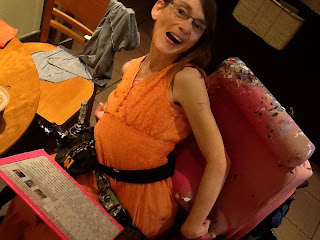 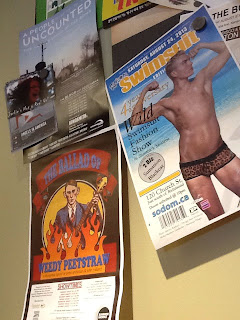 And yet, as Sarah and I were having dinner together back at my place, it suddenly occurred to me that this holiday used to be called Simcoe Day.  I think it was because I was telling Sarah that today would have been my parents' 64th wedding anniversary.

I decided then to write about it in this entry. My eyes found the photo collage on the wall. 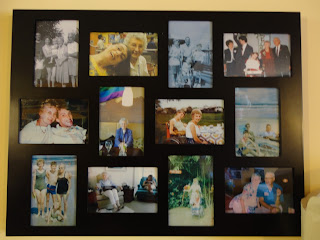 And then I saw this picture amongst them all: 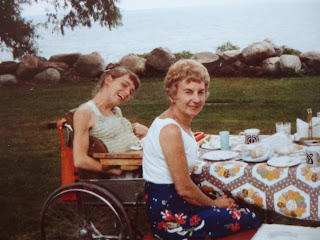 Mom and I are sitting outside of Aunt Frances' and Uncle Cy's cottage, situated on Lake Simcoe.  We are sitting at the same picnic table we sat at every summer.  Dad is there too, probably the person taking the picture.  Other relatives, like my Aunt Joyce, cousins Lesley and Susan, and Grandma Dixon were most likely there as well. Perhaps my mother's cousin Lynn with her two kids, Catherine Anne and Christopher were there on that day.  I can't recall.

What I do recall is that I always enjoyed our yearly visits up to see Aunt Fran and Uncle Cy tremendously.  We used to talk and laugh so much, and eat so many different delicious foods and play so many fun card games.  The cottage and grounds were both beautiful and welcoming, and the two boxers they owned were sweet and friendly.

I'm not sure when people stopped calling the first Monday in August Simcoe Day and began to refer to it as just the Civic Holiday, but I want to change it back! (I mention the name Simcoe Day and people look at me like I'm nuts.)

According to the CBC website, the history of Simcoe Day is as follows:

"In Toronto, however, it's known as Simcoe Day in honour of Upper Canada's first lieutenant governor and the man who initiated the abolishment of slavery in Canada. Toronto City Council established the civic holiday in honour of Simcoe in 1869.  .... John Graves Simcoe was a known supporter of abolition.  .....His bill was brought about by an incident — the Chloe Clooey incident," said Natasha Henry, a curriculum consultant specializing in African Canadian history.  ..... Simcoe received word of a slave owner violently abusing his slave, a girl by the name of Chloe Clooey, on his way across the Niagara River where he went to sell her into the United States. It was said that her screams were heard by many and the matter was brought to Simcoe's attention by Peter Martin, a former slave.  ....Simcoe's anti-slavery act was the first to pass in a British colony and remained in effect until August 24, 1833, when Britain's Slavery Abolition Act put an end to slavery in most of the empire."

(You can read the entire article at: http://www.cbc.ca/news/canada/toronto/story/2013/08/05/toronto-simcoe-day.html )

In a time where racial profiling is going rampant and where a man can get  away with killing a 18 year old African American boy, I think we should honour people who've had the guts to stand up for what they believe in and who change the system for the better.

Email ThisBlogThis!Share to TwitterShare to FacebookShare to Pinterest
Labels: Lots to Celebrate and Think About