My Days in England 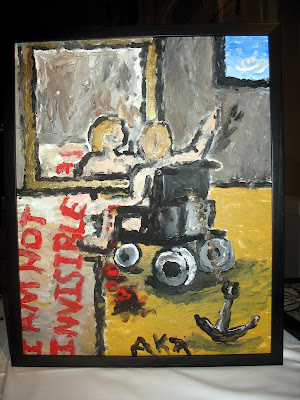 Ok, so maybe England isn't perfect after all.

Let me explain. First. there was the problem of not being able to charge my power wheelchair for the first 3 days due to the fact that there's a different voltage system from North America compared to that of Europe. Thankfully, the problem got solved when Sarah bought a Universal Charger from a wheelchair store. Cheers, Sarah!

I thought that was the end of the problems, but no such luck. Rob had gone out in the morning to the store and came back with some news: the lift was broken and they (the people who run the building) didn't think it would be fixed much before next Wednesday. Wednesday, I thought - trapped like a rat for 6 days! Eek!

I became frustrated, panicstricken, and depressed all in one shot. All my life, I had dreamed of coming to England and discovering my heritage. Now, I was faced with being imprisoned within the flat's walls, missing everything I had been yearning to see for years!

But, what upset me the most was the attitude of the people who run this building. When Sarah called down, they gave no sign at all of any empathy for our predicament. They seemed only to care about covering their asses, saying: "Well, we didn't really want to rent to Ms. Abbott, but Mr. Marr talked us into it. We're not actually 'wheelchair accessible'."

Well, anyway, since I began this entry, there have been good things happening! I've rented a manual wheelchair, which will be far easier to leave the flat in, and the people who run the building have agreed to reimburse me for it. Yahoo!
Posted by Annie's Dandy Blog at 10:41 AM

Email ThisBlogThis!Share to TwitterShare to FacebookShare to Pinterest
Labels: My Days in England