Today my friend Helen Henderson passed away from lung cancer.  She was 68.  Helen didn't even smoke. 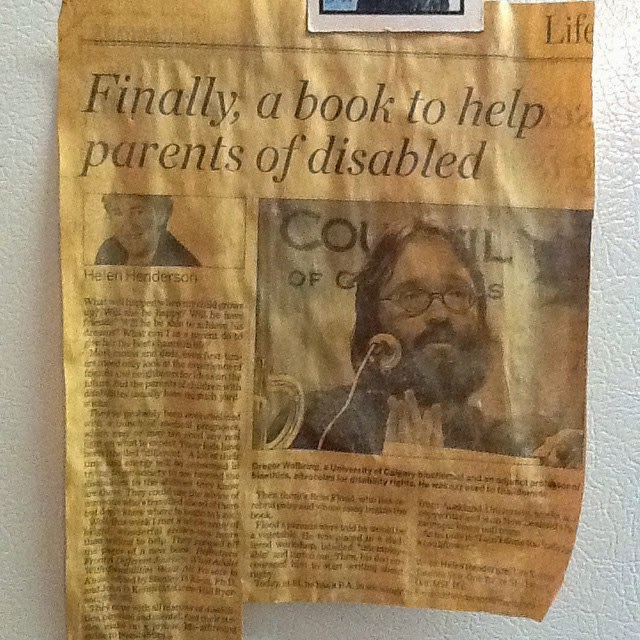 Our friendship began 10 years ago, when I went to her desk at the Star and asked her if she could review an anthology book in her next column. She agreed, and said that she was particularly interested in reading the story I had written.  "Finally, a Book to Help Parents of Disabled

Several months later, after I was fed up with fighting with Tobias House about its abusive attendants, I contacted Helen again to help me expose what was going on, not just in my building but at other on-site attendant care facilities.

The shit hit the fan.  Helen wrote not one but two exposees on the subject.  People with disabilities from all over Ontario wrote in to the paper, telling their own accounts of abuse. The government began to investigate thesse claims, and they also made it mandatory for everyone applying as an attendant to first take a course and receive a certificate.

Email ThisBlogThis!Share to TwitterShare to FacebookShare to Pinterest
Labels: My Friend Helen

We have provocative indian pakistani Models young ladies in dubai. we give you best administration in each piece of dubai. You can discover Excellent hot Indian Escorts, Oman Escorts Independent Escorts Russian Escorts Thttps://dubaimodels.co/turkishescorts.html Pakistani Escorts Students Escorts and Model Escorts. Presently with the assistance of our organization nobody will feel exhausting in dubai. Our organization is for eradicate every single exhausting thing from men's existence with cool and flawless Indian Escorts in Dubai. Our organization is working just on the request of our customers. There is a pattern of Pakistani Escorts in Dubai, Russian escorts Turkish Escorts and Student Escorts in Dubai. That is the reason our organization masterminded group of Escorts from various nations, Visit our site dubaimodels.co

Welcome to the biggest, as well as the best Dubai escorts directory dubaicallgirls.co, where you get a large variety of services and a diversity of escorts. Furthermore, depending on your preferences, on our website dubaicallgirls.co you can find Female Indian Escorts Pakistani Escorts Russian Escorts Turkish Escorts Student Escorts Model Escorts , available for you to meet, and eager satisfy your most profound desires. The best part about Dubai escorts is the 24*7 services. Whenever you call or contact to the girl you will get the right woman your need. At any point of the day, when you call an escort she will be very polite and kind. For details related to Dubai Escorts , feel free to visit our website dubaicallgirls.co

We step by step meet with absolutely one of a kind nationalities individuals in this way see the style of each person. Escorts in Islamabad You can simply profit Islamabad Escorts or Islamabad Call Girls on account of square measure. they a lot of overcome and hot and can bunk from their for you, Islamabad escorts can play on bed with you fundamentally in five star structures due to thy get their sexual forces a significant measure of in hotel rooms than to individual places.