There were a lot of good ideas floating around the market today.  Indeed, there were so many that my mind is still buzzing with possibilities!

Well, first this customer told me that she had six cats and that she wanted me to do a couple of paintings of them.  Yay!  I love people who are lovers of cats and art. There should be more people like that!

Not long after that, my friend Ian came to see me and to deliver a few canvas prints of my more recent works of art. 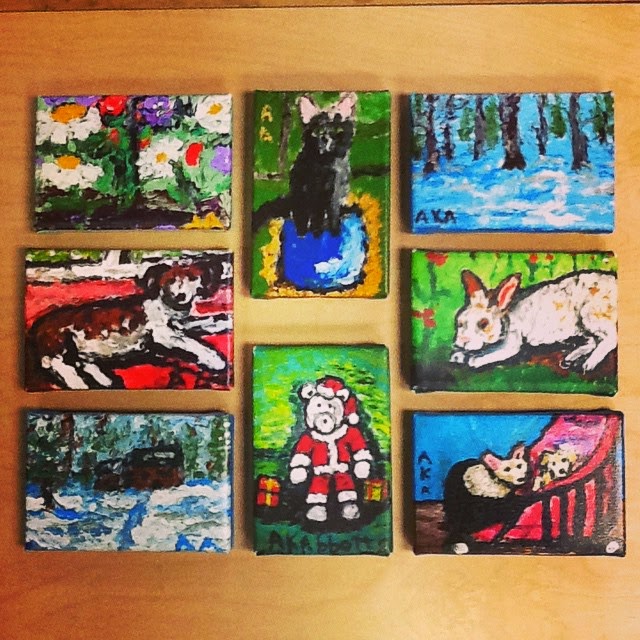 I paid Ian for his time and the materials, and told him,  not for the first time, how grateful I was to him for making the canvas prints.  It's one way I can sell smaller versions of my artwork to those who may not be able to afford the originals.

Ian suggested that I try selling my artwork over Instagam - a brilliant idea, I thought!  We got to talking about the art show he's having in the near future, and that gave him another idea.  He'd connect me with the person who is helping him set his show up and maybe they could do the same for me.

After Ian left, a customer came up and invited me to his art show in December, which is being held at Come As You Are.  As I was saying yes to my customer's kind invitation two lightbulbs went off in my head, one after another.  I knew the people who run the store Come As You Are (I've known them for years, especially Cory), so why wasn't I 1) seeing if they'd carry my new collection of nude art cards, and 2) applying there for my own art show?

Why indeed.  Years ago, they occasionally would carry my cards.  The quality of my cards is way better than it was back then.  And, also back then, it was suggested that I have an art show on their premises, but I didn't feel like I had enough nuddes to do that.  I do now.

Maybe it's time to contact Cory again at Come As You Are and see if I can set things in motion ....
Posted by Annie's Dandy Blog at 10:53 PM