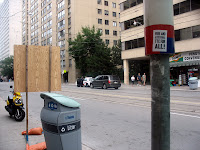 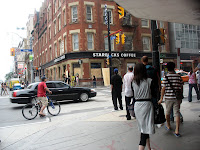 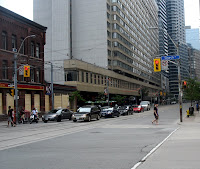 This is a continuation from my last blog. I feel like I need to tell my story from my own unique perspective. I feel like if I don't do this soon, I just might explode from my boiling fury at what injustices transpired during the G20 Summit.

Friday, June 25th, 2010: Members of D.A.M.N. (Disability Action Movement Now!), O.C.A.P. (Ontario Coalition Against Poverty), No One is Illegal and Grandmothers for Afghanistan were there, among dozens of other groups of activists. There was a very large contingent of D.A.M.N. that day (as well as other upcoming days) - it was so exciting and empowering to see so many people with disabilities come out to this monumental event!

We were all excited and ready to march and to cry out our frustrations with the government ignoring our pleas for financial stability, and our determination that we would be heard and that things would change for the better!

To have our voices heard, we used chants: Too many barriers, Not enough food, Sit down, roll on, fight, fight, fight! - Stair by stair, Wall by wall, We demand Access for all! - Hey hey, TTC, Public transit should be free, Ho ho, TTC, Make transit barrier free! As the scorching sun beamed down upon all 4,000 of us, baking us, we chanted and a Samba band played periodically, lifting our spirits and giving us strength to continue. It was a slow trek that lasted 5 long hours.

Let me say this: neither D.A.M.N., nor O.C.A.P., nor all of the many activist organizations who were there that day had any kind of thought of committing violence. We simply wanted to have our say, get our message to the public, and try to get as close to the G20 fence as possible. (The latter was a political statement: it was such a horrendous slap in the face, especially to poor people, that two billion dollars had been spent on the G20 instead of on social programs and reducing poverty.) King St, we'd heard, was the farthest point we could go, and that was fine with us.

We started our march from Allen Gardens at 2:30pm, and thousands of police shadowed our every step. Their looming presence was daunting, to say the least, but it didn't deter us from our mission.

Overall, it was a peaceful demonstration - on the side of the protesters, at least! At the corner of Carlton and Bay, cops suddenly grabbed some guy from the march and told him to get off the street. (I still don't know why this happened!) Apparently, the guy was young, of colour, and was Deaf. The cops didn't believe that he couldn't hear, though, and, thus, didn't allow his ASL interpreter to go with him. I was way, way ahead from this particular scene, but my peers explained to me that five friends of this young guy, who were also people of colour, tried to reason with the cops and got beaten for their efforts.

In some way, it was decided that we should keep on moving. So, we did. We marched and we marched, and several times the cops blocked our way, although we were nowhere near King St. or the G2O fence. No word was spoken by cops; we were only met by empty stares. At one point, when we were hemmed into a cul-de-sac off University Ave., there was a rumour that there was a sound canon around, so we all very hurriedly put plugs in our ears. I, myself, held my breath and waited for the attack on our ears. None came.

We started backtracking, until we, once again, reached Allen Gardens. There, we stopped and rested. Pup tents were set up, food was brought out, and entertainment was performed. There were several hip-hop singers singing about the world's injustice. I really liked their singing and dancing, but I was even happier when Simone and Ian came on. I love their music! Speeches about the extravagance of the G20 compared with the serious poverty in Toronto were read with passionate hearts. Lamia read my speech, and people seemed to enjoy it; one woman even asked if she could use it in her documentary about poverty.

Saturday, June 26th, 2010: I was exhausted on Saturday morning! It was the first morning in ages that I hadn't been to the market to sell my art. I half wanted to go to the protest I'd heard about at Queens Park, but my body said rest, rest, rest! I listened to my body and took it easy. I had a late brunch, took a hot shower, got dressed, and went out to buy a few things at the Drug Mart.

I'm not big on the whole soccer mania thing, but I let Motria talk me into watching the game between Ghana and the US at Mickey Finns. We both rooted for Ghana to win. While the game was on, Motria kept checking for updates on what was happening with the protest that day. Much to our surprise, we found out that a few of the protesters had started smashing windows of banks and iconic corporate buildings (Starbucks, American Apparel, Bell, Rogers, Tim Hortons etc - no "mom & pop" shops were touched, as later claimed by the police.) First, one cop car was reportedly torched, then another, and another. We could see cop cars go whizzing by Mickey Finns, and the TV now had vague news of the downtown riot scrolling underneath the game.

A million emotions ran through us at that time: curiosity, fear, excitement, and concern for our friends. Of the two of us though, I'm sure I was the only one who felt a certain amount of awe for the powerful symbolism that the protesters made by the smashing of windows of greedy corporations and banks. I mean, nobody got hurt, and I'm sure the corporations have enough insurance to replace a window or two.

The rest of the weekend was brutal and terrifying for the people who participated in saturday's protest - and even for those who hadn't. 900 people were arrested over the weekend, even during some of the most peaceful protests, where people sat, sang, and prayed. It has been an overreaction on a grand scale. People were corralled and beaten and threatened over and over again. Like dolphins caught in a tuna net, bystanders were ensnared. And now stories are coming up about how horrible conditions were at the detention centre. Some people were in there from 23 hours to 36 hours with no food, no water, no toilet paper. Most people had no idea why they had been arrested. Young teens were not allowed to call their parents, and women inmates were strip-searched by male cops. Disgusting treatment!

And, where were the cops that fateful Saturday when all this shit happened? I'd seen literally thousands of them for days. You're telling me that so many cops couldn't have stopped people in their tracks and prevented all of the damage that was done. Why didn't they? Eye-witness reports have circulated that cops weren't even near their burning squad cars, nor did they show any overt concern about them at all. It has been said the squad cars, old and without any radio equipment, were planted as bait for the protesters. The cops actually wanted protesters to cause damage so they could justify spending so much money on security.

This is "Toronto the Good". This is Canada the "Peace-Keeper". What happened?! It's Canada Day, and I certainly don't know anybody who feels like celebrating this travesty of a country!
Posted by Annie's Dandy Blog at 1:39 PM

i just heard that you got arrested yesterday?? i hope i heard wrong... and that you are okay.

You heard right, but I'm ok.