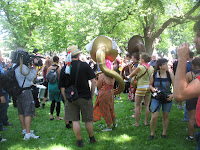 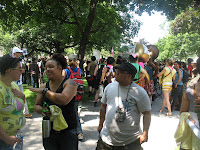 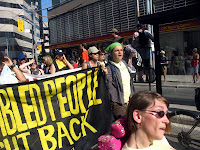 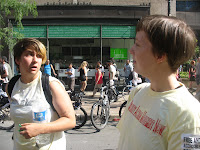 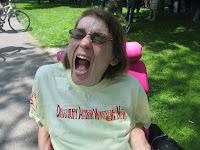 It's been a very long time since I did a blog entry. My heart was broken two times over. First, my dear husband Rob died in September of '09, which was particularly devastating for me. And then, my best friend Aaron Shelbourne died a few months later of bladder cancer.

Nothing really seemed to matter or had any great importance to write about.

On Friday, June 25th, 2010, I went to protest against the G20 Summit in my beloved city of Toronto. Twelve, maybe fifteen different groups all met in Allen Gardens, ready to march down the streets and, hopefully, get within 5 meters of the security fence at King St. (That was as far as you could go before getting arrested. That's what we were told anyway!) to voice all of our objections (of which we had many!) to the way the government was doing things. One of our main issues was that our government had given billions of dollars in bail out money to banks and big corporations and yet had cut the Special Diet from people on ODSP (like me!) and OW - people who really need that money to survive.

I'm a member of D.A.M.N. (Disability Action Movement Now!), and this is the speech I presented on behalf of myself and the group at the end of the demo:

People, we are here today to demonstrate our strength and unity to the government officials who have tried to beat us down, tried to humiliate us, and, finally, tried to scare us with those bloody sound canons!

They want to strike fear into our hearts because they're actually the ones afraid of us, afraid that we won't stop fighting until our demands are met! And, by god, we won't!

We demand that the Special Diet be returned to the people who really need it, people on ODSP and OW, who need to buy healthy food in order to survive and thrive. People on ODSP and OW should have their monthly rates raised by 40% NOW! We need to be able to pay our rent AND buy food within the same month.

People with disabilities are forcibly imprisoned in places, like psychiatric institutions, nursing homes, prisons and detention centres. Refugee claims are commonly denied if someone is identified by the state as disabled, whether or not that person agrees with such a label. People with disabilities are kept out of much sectors of employment and also pushed into labouring in for profit sheltered workshops for miniscule pay. Prisons are full of people with disabilities. This discrimination and so much more adds up to a ensuring that so many amazing people in our city and in our world are kept in poverty, kept incredibly isolated, kept in danger and kept as tools for the profits of exploitative governments and companies. We are people and we've had enough. We demand an end to the systemic abuse and discrimination towards people with disabilities. We have a right to employment, to use public transit, to immigration status, to education, to safe and healthy food and shelter, and to freedom of movement and self determination in our own communities!

We demand that the cap on Direct Funding be lifted NOW! Every day there are many types of abuse that are inflicted upon people with disabilities who live within attendant care projects or institutions. People with disabilities should have the right to be able to say who can assist them with their daily routines and who MUST NOT! Seven hundred people have Direct Funding in Ontario; there are thousands of others who also need this funding in order to lead truly independent lives and feel safe in their own homes

I, myself, have lived within 2 separate attendant care projects before I finally received Direct Funding. I thought the first project was unbearable. The abuse was recorded by management, and then swept under the rug. I decided to move to another project, anything had to be better than what I had just experienced. I was wrong! It was different people, sure, but same types of abuse by the attendants and same do nothing attitude of the management. I felt frustrated and disrespected. I cried buckets of tears, not knowing where to turn, what to do. And then, my tears dried and my anger boiled. I went to the Toronto Star and told them about my abuse and neglect. Soon after the article came out, I applied for Direct Funding, and, amazingly, I got it within 6 months. My life did an 180 after that. I was happy, confident, and in control of my own life. The people I hired to assist me liked and respected me, and I felt the same way about them.

I now feel the same frustration and sense of disrespect as I did when I was dealing with the people at the attendant care projects. The government doesn't respect us! We keep telling them what we need and they turn their backs on us. If they respected us, they wouldn't put off making Ontario accessible by 2025! If they really respected us, they wouldn't have cut the much needed Special Diet only to spend one billion dollars frivolously on the G20! We don't need a fake lake or sound canons – we need enough money to live on! We need accessible transit and affordable housing! We need to be able to have the choice of getting Direct Funding if we need it! And, most of all, we need the respect from the people who govern our country! We need all these things NOW!

Solidarity with everyone who was pushed around, intimidated, beaten or detained by cops this weekend for trying to stand up for themselves, and to those who were simply caught up in the melee.

Is it any wonder I had a Mad Max-like dream last night?