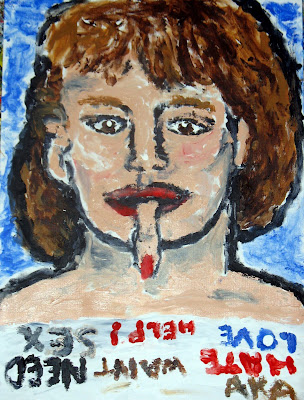 People often say to me, "Anne, you haven't written anything in your blog in a while." I immediately wince, slap myself on the forehead in frustration, and curse the annoying fact that I don't have a clone yet to assist me with all the projects that I take on.

I love working on my blog. Besides painting, it is one of the most gratifying things I do in my life. To know that people are reading what I say and becoming informed about what it's really like to live with a physical disability and live on ODSP, and to know that I also bring the occasional smile or chuckle to my readers - that's an incredible feeling!

Sometimes after an eventful day, I think to myself, Yeah, yeah, I have to write about that! But then life takes over and I find that I have 20 emails to answer, or I forgot to pick up something at the grocery store, or there's a painting I need to finish in a hurry, or I need to do the payroll for my Direct Funding employees. Sometimes, too, after a long day, I just want to chill out and do an on-line crossword and watch TV.

The things that don't get said haunt me. They itch at the back of my mind begging to be released upon the never-ending scroll of this blog.

So, here is what I propose, dear readers: tonight, I'll tell you the story about my hospital stay last week. (Yuck, I hate hospitals!) Tomorrow, I'll take a break. I know I'll be exhausted after a full day at the market and then going out with Lamia, Motria, and Mishan for dinner and a movie. (The new Johnny Depp movie: "Public Enemies" - Yahoo!) And, then, on Sunday, I'll set down the stuff that's been kicking around in my head for a few weeks.

So, last Tuesday, I was having my usual dinner out with my mother and a couple of friends. I'd had maybe three mouthfuls when I felt something get caught in my esophagus. Chicken, I thought, probably chicken.

I didn't panic. This sort of thing has happened to me hundreds of times all throughout my life. Only a handful of times have I had to go the hospital because I couldn't dislodge the food myself.

Unfortunately, this was one of those times.

On Wednesday morning, I woke up and could still feel the lump hiding in my esophagus, so I told Lenny that I wanted to go to Mount Sinai Hospital. I've been to pretty much every hospital in the downtown area for one thing or another, and I've had the best luck with Mount Sinai Hospital.

It started off ok. I got registered, and we got into an Emergency Room cubicle almost immediately. And then, the long waiting began. Nobody came to see me for three hours! So, Lenny and I played Gin Rummy on the bed all during that time.

A doctor came to examine me, finally. I told him that I'd had something (probably chicken) lodged in my esophagus since the previous evening and that I couldn't eat or drink anything because of this. He ordered an x-ray to be taken of my chest area and for me to be put on an IV drip so I wouldn't become dehydrated.

They also took blood, and then they tried to thread a tube through my nose into my throat to see what was going on down there. Neither one of these experiences felt great! I almost cheered when they told me they were going to take me, knock me out, and get the chicken out. This was one thing I was familiar with and knew what to expect.

I went into surgery at 9:30 that night. They told Rob and Motria (by this time Lenny had gone home) that they could take me home afterwards, but I knew it was a lie. They never let you just leave after surgery; they always want to keep you in overnight for "observation".

Half an hour later, the doctor came out and told Rob and Motria that the operation had been a success. They had removed all the chicken and had had to even put in staples in my esophagus in order to widen it. It was the worst case they'd ever seen.

Rob and Motria were sent home, and I spent the night in the hospital. I slept most of the night, except for the nurse who checked my vitals hourly. I didn't mind that, it was expected.

The frustration came in the morning when the nurse shoved a bedpan under me and expected me to release myself while she stood over me and said repeatedly, "Are you finished yet?" I tried to get my communication board so that I could point to the phrase: I'm fine to be by myself, please leave me alone! However, although the nurse kept handing me my board but not close enough for me to reach. Not understanding her mistake, she kept putting my board away, saying, "Well, if you don't want it..." This, of course, frustrated me even more, and I wanted to scream!

Fortunately, another nurse came in and figured how to communicate with me. Although he was a tiny bit condescending (he spoke in loud and slow tones), I appreciated his kindness and patience. He helped me to drink apple juice and to call my my mother.

All in all, it is my fervent hope that I don't have to go back to the hospital for a very long, long, long time!
Posted by Annie's Dandy Blog at 5:44 PM

Email ThisBlogThis!Share to TwitterShare to FacebookShare to Pinterest
Labels: So Little Time, So Much to Say