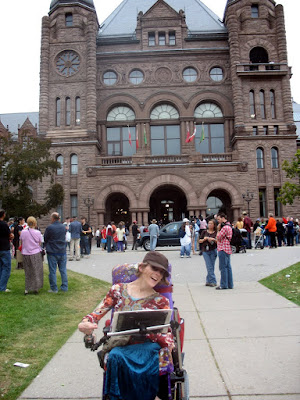 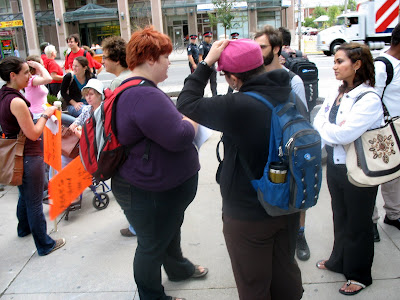 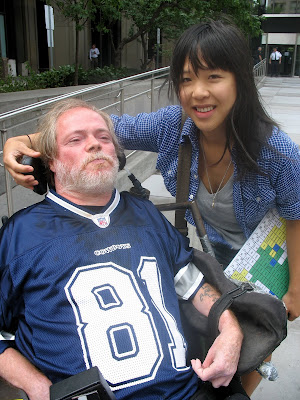 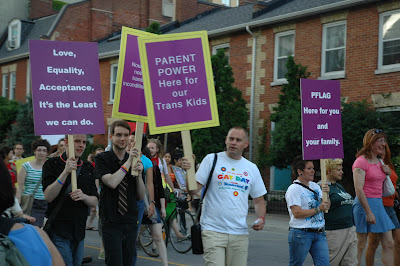 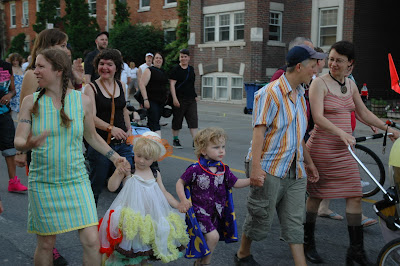 Two weeks ago, Pride Week was happening on Church St. I love this part of summer! It gladdens my heart to be part of this festival that celebrates diversity, freedom, and acceptance.

During one of those days that the festival was on, Mom, Motria, Sarah, and I went to the annual underwear show at Cafe California. As we dined and gazed at the beautiful male models in their underwear, the hostess of the show (Candy Barr)

gave us a brief history on how gay activism started in 1969 when police raided a gay bar called the Stonewall Inn. Fed up with this type of harassment always happening to them, people started to fight back. At first it was 400, but then the numbers swelled to 2000!

This was how gay activism was born.

Upon hearing this story, I felt great admiration rise up inside of me ... and some envy too.

On June 25, 2009, I went to the latest anti-poverty meeting - and boy, was I disappointed! I had been to maybe four or five of these meetings before this and, at first, I felt very hopeful that this group was just what was needed to make positive change happen. ODSP reform and an increase in monthly funds seemed possible, seemed within our grasp.

I started being disillusioned with this anti-poverty group when I attended the meeting before the one on June 25. The main topic was whether or not we should allow "service providers" into the group. I still don't fully understand what that term refers to! Did they mean professional people, like doctors, lawyers etc? Or, were they including "service providers", such as people who run attendant care projects? (God help us all if this were the case!) And why was this the biggest question of the meeting? It had nothing to do with ending poverty.

It was more of the same at the June 25 meeting. It opened with questions about why numbers were dropping in attendance and how we could try to get more people involved. We then discussed how to further proceed. What should our main goals be? We were told by the facilitator that the Liberals had provided extra funds to low-income families with children, but still had not looked at the issues of ODSP. In fact, they told us that the McGinty government were dragging their heels on the promise of reviewing "silly rules" of ODSP (for example: 1) having a chunk of money taken away from recipients if they had a part-time job, which puts them no further ahead than before; 2) losing the ODSP pension altogether at 65, only to receive the Old Age Pension which is even less than ODSP; and 3) if a recipient has a credit card, which many people do because we don't get enough money to live on, it's viewed as extra income and, thus, frowned upon.) The fact that the McGinty government wasn't taking the plight of ODSP recipients seriously infuriated me, but no one else seemed to be bothered.

Someone suggested that we start out small by ensuring that ODSP workers treat us with respect and provide us with all of our rights and entitlements. Fair enough, I thought, this was a good idea that should be seen to ... sometime. I, personally, didn't think that this issue should be the first main goal of the group - especially since we had just heard that the McGinty government was dragging its heels on the promise of reviewing the operation of ODSP and still had not looked into the possibility of raising the rates to the poverty line - or above it!

The guy beside me suggested that we all go home and write down any thoughts about what was really important to us and where we should put our energies. I liked his idea and told him so.

And then, I suggested that perhaps we each could write a letter outlining all of our concerns and needs, and send a copy to McGinty and of all the polititians on Parliament Hill. They had to hear what we had to say and take notice of us, I said!

People nodded, sure, and some agreed with me, but they still appeared to me as overly cautious. More than once I heard someone say, "Oh, we don't want to do anything too big." The facilitator informed me that a similar idea had been brought to the table at another meeting a month back (I suppose I missed that one!) The group, she explained, was going to write our "stories" down and send them to our MPs. They were just waiting for the "storytelling template" to be designed by one of our members and sent out to everyone before we could actually start.

(It is now 20 days since that meeting and I still haven't received that "storytelling template". I somehow have a feeling that I won't be needing it, though ....)

I always remember a few years ago when my friend Simone and I looked up disability activism in the US. What we found was a group called ADAPT (http://www.adapt.org) - and what they did was incredible!

In 1990, people from ADAPT took their protests to the steps of the US Congress. (http://news.google.com/newspapers?id=SgwQAAAAIBAJ&sjid=b4sDAAAAIBAJ&pg=6491,2252390&dq=adapt+white+house+steps+1990) To demonstrate the daily discrimination and obstacles that they faced, people got out of their wheelchairs and began to climb the steps - all 86 of them! The focus point of the protest was to show support for the Americans with Disabilities Act to be passed.

ADAPT is still doing gutsy things in order to be heard and get equal rights. Please watch this video, it's very worthwhile! Not everyone with a disabillity is forfunate enough to be able to choose where they live. (http://www.nickscrusade.org/wordpress/tag/adapt)

People with disabilities need to be heard. I feel very passionate about this! We are so hidden away from society, our stories of plight rarely, if ever, are known by the rest of the population.

On June 4, 2009, I read an article that Helen Henderson of the Toronto Star wrote. In essence, it validates what I have just said.

Last month, the province announced it has appointed consultant Charles Beer to conduct a review of the Accessibility for Ontarians with Disabilities Act (AODA).

It came into force in June four years ago, developing sets of accessibility standards and rules to be brought into customer service, transportation, information and communications, employment and the so-called built environment, which includes infrastructure. This year's review was mandated as part of the Act.

Beer, who spent a brief time as Ontario's minister of social services from 1989 to 1990, when the Liberals went down to defeat at the hands of Mike Harris, says he is still in the process of getting organized. He is expected to hand in a report by January.

Even though the AODA has been in effect for four years, "there are still a lot of people just realizing that they have to comply," Beer says.

I've written letters to MPs, appeared in newspapers many times, participated in protests, and, of course, voiced my opinions here in my blog. These are the ways I attempt to fight oppression and to make people understand what life is like for people like me. Although I am only one person, I hope I'm reaching people and educating them about what is at stake for us in order to truly be able to fit into society.
Posted by Annie's Dandy Blog at 5:21 PM

Email ThisBlogThis!Share to TwitterShare to FacebookShare to Pinterest
Labels: So Little Time, So Much to Say