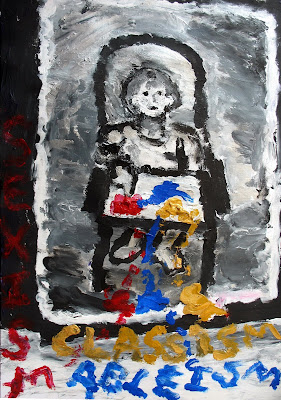 This painting to the left shows me as a 3 year old, first starting to paint in my highchair. The paint drips onto the floor and splatters outside the black and white photo. Three words are formed: Sexism, Classism, and Ableism. The painting is called: "Where Has My Innocence Gone?"

I used to be rather sweet and kind of naive about how the world worked. You know how it is. In the beginning, you're pleasantly ignorant about how bad some people can be, about how governments orchestrate wars, and about how unequal and unfair the world actually is.

I've become slightly jaded. I feel especially jaded when I talk to the people at ODSP (Ontario Disability Supports Program) and HME (Home Medical Equipment). The swear words in my head just repeat over and over. I get so bloody frustrated by these people who are supposed to help me and are supposed to have some knowledge about disability issues. Grrr!!!

Waaaaay back in August, the saga of my commode chair began. The wheels were very stiff and it was difficult for my employees to push. Plus, one wheel looked like it was going to come off, which was dangerous for me. So, I called HME and asked if they could fix my commode chair, and they said they didn't think that they could fix the wheels because they didn't make that model any more. They then told me to call ODSP and ask them if I could apply for a new commode chair. I did, and ODPP told me I would have to get an assesment from an OT before I could order a new one. Inwardly I groaned, because it meant more bloody red tape. (What's so complicated about choosing a new commode chair? I can do it myself!) However, Motria who had just graduated from OT college said she could order a new commode chair from a different place, and it would only take two weeks. However, nothing is ever that easy in the world of disabilities!

They sent me out a loaner commode chair right away. I sat in it and thought I was going to die! The seat hurt my ass and the back had a rough surface which cut into my back. The next day I called them and asked them to please pick it up, and to please send out an OT who could assess me and get the ball rolling. Well, they never did come to pick up the commode chair, although they did claim that they had been by, but I sure never heard them ring up to our apartment! Rob spends 99 per cent of his time at home, so I don't know how Rob could have missed the call.

Well, the OT finally came and she was nice but she didn't show me any types of commode chairs. She just asked me questions about my life, and asked me why i wanted a new commode chair. (Well, duh! I wanted to excremete without fearing for my life!) She said she would come back with more questions in a week.

Well, then I kind of took things into my own hands. My dear friend Aaron gave me his old commode chair, because he had heard of my plight. Maybe I was too hasty, but I threw out my own commode chair, thinking it couldn't be repaired anyway. Unfortunately, Aaron's chair began having similar problems with the wheels. Bloody hell! I was right where I started. Not only that, but the OT place that had sent me their commode chair was now sending me bills for the rental charges!!! Bastards!

It was now the middle of September, and I had an appointment at HME to get fitted for a new seat for my wheelchair. Now then, you need an OT to get fitted for a new seat so there was one there and I knew her very well. Also, i was in the "show room" of HME surrounded by new wheelchairs, and guess what? Commode chairs. I sat in one, loved it, and asked the OT to please order it for me. Simple, right? Not so much.

The assessment and quote were faxed to ODSP. I also got rid of the commode chair from the OT place without paying one red cent. Things were looking up, or so I thought. Three weeks went by and no news, so I called HME to see what was going on about my new commode chair. I played phone tag for maybe two weeks, getting more and more frustrated. Occasionally I would hear from them, but all they would say was that they would look into it. Just before Christmas I started talking to someone else, and they sounded positive that they could get the ball rolling.

Two weeks ago, I called HME one more time repeating for the millionth time that I really needed a new commode chair because I was getting sores on my ass and back, what was happening with my new commode chair? I almost screamed at the woman's response! She said she called ODSP and they said to get my commmode fixed. They would need the original bill faxed to them. I said, are you kidding me? I don't want my commode chair fixed, I want a whole new chair! I threw out my old one because you guys said it couldn't be fixed! She then directed me to call ODSP myself, and explain to them what had happened. I did, and the woman at the ODSP office said, so, you want your commode chair fixed. You have to get HME to fax me the original bill. Stifling a scream, I gathered my patience and explained to her that I wanted a new commode chair, not to have my old one fixed. Her response was, well, you know you need an assessment from an OT. My frustration mounting, I popped a Lorazepam and explained that I had already had an assessment back in September, didn't HME send you that? Apparently not, she had only received the quote. I was directed to call HME and tell them to fax the assessment to ODSP. The people at HME said, oh yes, to get a new commode chair, you needed to get an OT assessment, and she would try to find me one. I almost did scream then, but very patiently explained that back in September, your OT already did assess me, find the original fax and everything will be fine.

God willing everything will be fine from now on, because HME told me they faxed both the assessment and the quote to ODSP, and ODSP told me they received it.

Pardon me while I go scream and take another Lorazepam.

Email ThisBlogThis!Share to TwitterShare to FacebookShare to Pinterest
Labels: Supporters

Hey, very nice site. I came across this on Google, and I am stoked that I did. I will definitely be coming back here more often. Wish I could add to the conversation and bring a bit more to the table, but am just taking in as much info as I can at the moment. Thanks for sharing.
COMMODE STOOL

Hey, very nice site. I came across this on Google, and I am stoked that I did. I will definitely be coming back here more often. Wish I could add to the conversation and bring a bit more to the table, but am just taking in as much info as I can at the moment. Thanks for sharing.
Commode Chairs