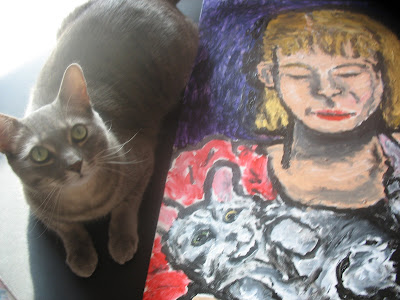 Ok, so, yesterday Motria and I were having a small debate about the rightness or wrongness of letting your pet cat go outside on a daily basis. Motria told me about her friend whose cat had recently been outside and had drank anti-freeze and died. I said that's why I don't believe in letting cats roam free. And then Motria said that her friend thought that keeping cats inside was like torturing them.

The debate didn't continue much further than this because we had to get going to the market.

However, as I sat in front of my building's two broken elevators, waiting for at least one to be fixed so I could go downstairs and go out, I did feel an ounce of pity for those poor house cats that were never allowed to venture outside.

And, of course, I felt some pity for myself as well. I sent Motria off to the St. Lawrence Market with a bag of my cards, and I told her I would be there as soon as the elevator was fixed. While I was waiting I dozed occasionally and rolled my eyes at people who walked by and said to me, "the elevator is broken you know?" Well, Duh! And I also thought about how terrible this situation is. Not just for someone like me, who is in a wheelchair, but for people who are elderly and have trouble walking upstairs. And I also thought about how it is an issue of classism, because my mom lives in a beautiful condo and her elevators never break down.

I waited there from 8am until 10am and as soon as the elevator door opened I was in it like a shot! Glad to be free, I zoomed to the St. Lawrence Market and took my rightful spot. Unfortunately, not long after I got set up this annoying vendor, who I've mentioned before, came along and told me I was too far over on her side. Even though I was in the exact same spot I always am! However, I swallowed my pride and let Motria and her move my cart about half a foot because I knew the vendor to my right would not be coming anymore. I gritted my teeth when the annoying vendor asked me if I would be at the St. Lawrence Market all winter. Then she suggested maybe I should move my chair a bit forward. I rolled my eyes and ignored her. Give me a break!

From then on the rest of the day was fantastic! My sales were very good for January. And I had so many people come up and rave about how fantastic my art is! That made me feel good, like I am not wasting my time. A lot of people said they would commission me for a painting, but unfortunately no one actually gave me any money or definite dates. Still, I am hoping someone will come back.

Email ThisBlogThis!Share to TwitterShare to FacebookShare to Pinterest
Labels: and Commissions, Cats, Elevators