Yes, I admit it, I'm a geek. I watch shows like Torchwood, Gotham, Fringe,  Supernatural, Vampire Diaries etc. I also like watching old reruns of That Girl, Buffy the Vampire Slayer, Star Trek, and Battlestar Galactica.

Last week I watched the pilot episode of series 10 of Doctor Who, and the last sentence the Doctor uttered made me think Yes, yes, that's exactly how I feel!  That's how I view life!

The Doctor had to make a decision:  wipe Bill's memory and stay put in a boring teaching job, or go off in the TARDIS and take Bill with him and have marvellous, exciting adventures. He chose the latter and told Bill, "Sometimes TARDIS stands for What the Hell."

In my mind, I elaborated on that sentence. I thought, Why the Hell Not? Why not take chances and live life to the full?

Recently,  I had the opportunity to try out to.be in the PARALLAX Art Fair in London, England.  I go  in July.  How exciting, eh?! It wouldn't have happened if I hadn't thought Why The Hell Not?

Today I'm also expecting an O.T. to come and assess me for a new wheelchair. I'm trying to get it before I go to England, but it may not be possible. Still, gotta try, right?

On Wednesday I tried the new unicorn frappucino at Starbucks instead of my regular peppermint mocha frappuccino. I thought, What The Hell. Sometimes you just have to live on the edge. 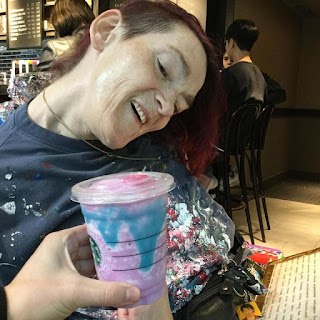 Email ThisBlogThis!Share to TwitterShare to FacebookShare to Pinterest
Labels: What the Hell

Annie - I have been watching all the Buffy episodes over the last couple of months, having totally missed them the first time around!
So glad to have met you today and happy it looks like it will work out with the cats. Thanks for saying "what the hell" to meeting them. :-)

I'm shakshi.I am working in India top most Escort serviceMumbai escorts.If u want to join the all facility of escortsPuri escorts
pls call me & whatssapCuttack escorts
visit the sites.Bhubaneswar escorts

Hi friends ! I'm Archana Kumari. I like to have bed relationship with different persons rather than with a single man for the whole of life. I do it for enjoyment. If you are interested in me then,
Please follow me on the links given bellow.
Thanks.

However, the fee will increase with extra complexity and features. Complexity of Slot Game – The variety of reels, bonuses, mini-games, and so forth., bring up the fee. User Acceptance Testing – your customers play the slot recreation search out|to search out} potential bugs or points throughout runtime. You have now accomplished brainstorming, market analysis, and threat evaluation. Do your analysis and evaluation tell you 카지노 your slot recreation is an efficient idea? You can begin narrowing down your ideas to generate concrete necessities for slot growth.