My Time in Baltimore 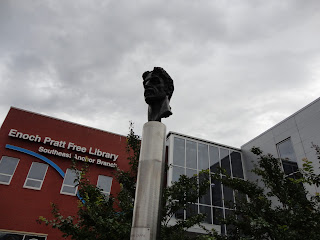 As my dear friend Aaron would say, " I did it!" Yes, I went to Baltimore, Maryland, just as I had planned on, dreamed of, and dreaded doing for the past 6 months. It was probably the hardest and yet most beautiful experiences of my life.

Five of my closest friends came with me on this momentous journey. They were wonderfully supportive, knowing that I wanted a balance of honouring Rob and his idol Frank Zappa, and seeing some of the art galleries and museums in Baltimore. 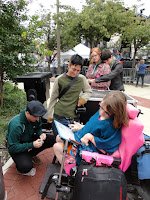 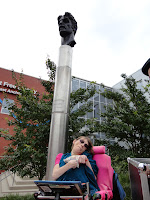 We got up on the 17th and ran out to the Frank Zappa Day Festival.  Actually finding the library where the bust of Frank was was rather difficult.  Who knew there would be two Enoch Pratt Free Libraries in town?

I had been ok up until I saw that beautiful bust, and then I let loose and bawled. I wanted Rob to be there with me so badly and it didn't seem fair that he couldn't be.  Rob would have been so thrilled to be there.  He would have played Mr. Nonchalant, but I, who knew him better than anyone, would have seen the sparkle in his eyes and that spring in his step.  As I sprinkled a very, very light dusting of Rob's ashes around the base of the monument, I consoled myself with the idea that maybe Rob's spirit was there.  Hell, maybe Frank's spirit was there too. 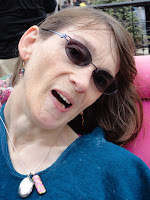 We started looking around the grounds of the festival and found many wonderful and unique crafts. Some, to be sure, had a FZ theme, but a lot did not. I bought myself a large magnet that said: "Legalize Marijuana in Baltimore." My friends bought me a beautiful necklace and earring set. Somebody found a program of what was happening that day, and one of the things that piqued my interest was the fact that inside the library there was a poetry reading to raise money for the Poe House, a community space dedicated to local poets in the memory of Edgar Allen Poe, himself another wacky Baltimore native. Both Gail and Ahmet Zappa were to be reading at it. I love poetry and Poe is one of my favourite writers, but the icing on the cake was the chance to meet Gail and Ahmet!

My friends and I were escorted inside and I was told to go sit beside Ahmet, in the front row. Aaaaahhhhh, can you believe it?!  I was so close I could have reached out and touched him, but I exercised restraint.  Gail was sitting on his other side. Because of this situation, and because of the emotional turmoil I had just been in sprinkling some of Rob's ashes, I asked for a lorazepam.

The poetry was wonderful. Especially the first guy, who dressed and spoke theatrically and recited Poe's "The Raven."  The poem that Gail read was one of my favourites too.  "Evelyn the Modified Dog" was written and sung by Frank Zappa. Gail read it as a poem and it worked really well that way. She made the point that song lyrics really are poetry.

After the reading I saw Ahmet running off. That was disappointing because I had planned to buy his book and get him to sign it. I approached the table to buy a book anyway and ran into the aide to the mayor of Baltimore. At first she was trying to rush Gail off to the next event and then she realized who I was. "Oh Anne! You must be Anne! ... Gail, this is Anne, the woman I was telling you about!" And then the moment arrived ... I got to meet Gail Zappa. And what a meeting it was!

She was so gracious and kind and down-to-earth. And she got me. It's rare for strangers to immediately get me like that. When I started crying and told her that I wished Rob could have been there because he loved Frank so much, and that I missed Rob so much, she started crying too and told me how much she missed Frank. It was a really incredible moment to share. As it that weren't enough, she gave me five of Frank's CDs, including one that has yet to be released. What a wonderful person!

My friend Michelle pulled down a copy of the festival poster for me, and Gail kindly signed it for me.  I also gave Gail a postcard and notebook I had made with the painting of Frank I had done on them. She seemed thrilled with them!

After that, my friends and I went to see a documentary on the making of  "200 Motels"  -  a film Frank made in the 70's.  I had heard that Ahmet would be there, and I thought I could get him to sign my book, but he wasn't there.  Instead, Gail was! And after the film she did a Q&A where she proved to be just as thoughtful and grounded as she'd seemed when we first met, and sassy too!

The film had been shown at a gallery space called The Creative Alliance. On my way out of the film I ran into the Artistic Director of the gallery. She explained the exhibit on the main floor and asked if we wanted to see the upstairs exhibit. I told her that we didn't have time because we were going to dinner and that I was an artist myself. I gave her one of the Frank Zappa postcards I'd made. Then she encouraged me to become a member of the gallery and to submit a proposal for an exhibition of my work in the upstairs space!! She said that normally that space focuses on local artists, but that it was definitely worth applying. I came up with the brilliant idea of proposing an exhibit that centres around this trip to the Frank Zappa festival, showing the paintings I did and all the video I made in lead up and during. Maybe it could be on during next year's festival and I could get a free trip down! 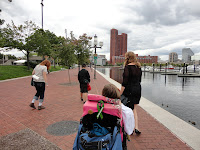 On the 18th of September we went along the city's beautiful waterfront looking for good and cheap food to eat.  And then, we strolled over to the American Visionary Artists Museum, an art gallery dedicated to quirky and undercelebrated works by self taught artists. We almost didn't make it inside because the outside of the main building (there are three) was so beautiful - completely covered in glass and mirror mosaic and surrounded by glass and mirror mosaic-ed sculptures! 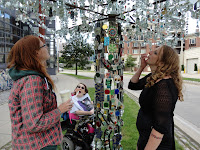 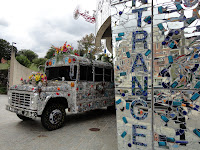 There were even more cool things inside, like a life-size sculpture of a naked caveman made entirely out of wire. There was also a spectacular rotating bejeweled sculpture of Icarus suspended in the centre of a spiral stairwell, flying into the sun, wearing nothing but his wings and a ruby red bejeweled thong! Downstairs we saw (and some of us sat on) a bench covered in whoopie cushions, followed by a series of small artworks all dedicated to flatulence.  I was surprised by one thing I saw at this particular exhibit:  A photo of Queen Victoria with her favourite "fart jar".  Apparently, she liked to put her farts in jars and keep them.  Because of this somewhat weird fact, jars became better and better designed. 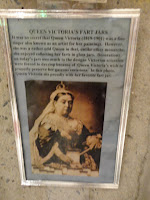 That night, back in our hotel room, we ate take-out, listened to music and to some of Rob's podcasts. Not everyone stayed up until 3:30am like I did.  I stayed up for a very special reason. Exactly two years earlier, at 3:30am on September 19, 2009, Rob died and I couldn't be there with him. If spirits exist and the time of their death matters to them then maybe Rob knows I wanted to be there for him and that this year, in a way, I was. We toasted him and I hope he could feel all our love for him. I mean he sure would be silly not to know how we feel about him since we orchestrated this entire trip around a celebration of his life ... but, he was a pretty humble guy. 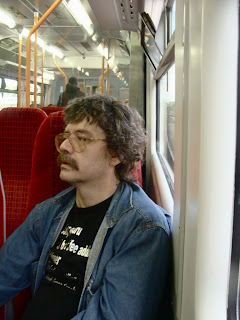 Email ThisBlogThis!Share to TwitterShare to FacebookShare to Pinterest
Labels: My Time in Baltimore