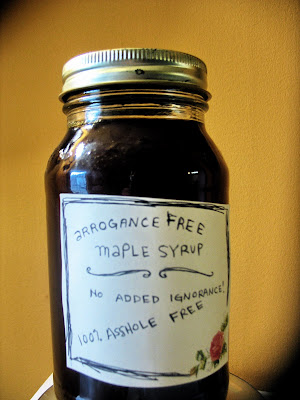 So, this past Saturday, after working 8 hours at the St. Lawrence Market, I decided to go and confront the Maple Syrup Man and try to return the maple syrup I had bought from him the week before. (I had thought about simply using it on pancakes etc, but I just couldn't bring myself to do this because I didn't think I could enjoy it after all of the emotional turmoil I had felt.)

I didn't swear at him or try to act confrontational. With Laura's assistance, I told Maple Syrup Man that I was returning his syrup because I had felt offended by his comment re my inability to manage my own money. (He didn't know me or anything about my life! How could have put such a false label upon my being?) I also told him that I'd never buy anything from him again.

Maple Syrup Man didn't apologize, nor did he accept responsibility for the mental anguish and humiliation that he caused me. In fact, he flatly denied saying anything at all about my inability to handle my own money.

(Laura and I looked at each other in disbelief. We had both heard him with our own ears! How could he deny what he had said?)

Maple Syrup Man then tried to defend himself further by stating that he had only meant to complement Laura on the way she "took care of me".

Mentally, I screamed and ranted in my head. Didn't he realize that that comment was offensive too? Would he have gone up to the assistant of, say, Donald Trump, and commend them on how well they were "taking care" of Donald? I think not! I run my own art business; I manage my own attendant care business; I take care of my household, making sure there's enough food and essentials in our home. I'm a bright, capable person, and yet, that single comment seemed to put a dark shadow over all of my accomplishments.

Laura and I rolled our eyes and headed home; we knew there was no reasoning with Maple Syrup Man. He just had his own way of thinking. At least I had closure by returning his maple syrup.

But there is an even sweeter ending to this story; today Sarah brought me a huge jar of maple syrup. When she and her family heard that story of the Maple Syrup Man they put aside the maple syrup from their farm in Ottawa, just for me.

Thank you Sarah and family!
Posted by Annie's Dandy Blog at 12:17 PM

Email ThisBlogThis!Share to TwitterShare to FacebookShare to Pinterest
Labels: Closure.........