Changes, Both Good and Bad 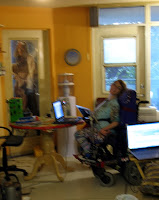 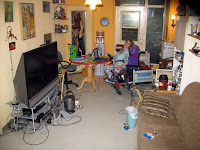 So, Rob got his new sofa and I got a whole new apartment... sort of. It took 4 days of rearranging of furniture, cleaning and mopping, and throwing out junk, but now it looks spectacular! It looks the neatest that it's probably ever been. I'm so happy!

That was a good change in my life. There were a couple of not-so-good changes that happened at the St Lawrence Market this past weekend. Minor things, sure, but they still annoyed me just the same.

First of all, they had removed all of the tables and chairs which used to be across from my cart. People used to sit and eat there and chat with me. It was nice talking with people. Sometimes they became regulars, and because of this, this even produced sales for the surrounding vendors and me. Now, the New Zealand vendors have expanded their domain and put 4 large glass cases showcasing their jewellery, replacing the tables and chairs. Disappointing, sure, but not a huge deal....

And then, there's a new vendor who sits on my left side. She says she knows me and I vaguely recollect chatting with her maybe one year ago. Well anyway, I sure won't forget her now. She was big, loud and pushy. She came in way after the vendors to my right and I had set up and started telling us we had to move over because she did not have enough space. Before we had time to digest this request, she promply grabbed my cart and moved it herself. Two things will automatically piss me off, one, taking my food without asking, and two, touching my stuff without asking. I am generous and reasonable, except for when this happens.

Well anyway, this topic is called "Changes, Both Good and Bad," so I have more good changes too. I've heard through the grapevine that Tobias House is finally reprimanding and punishing its employees for their inappropriate behavior. Its employees are being suspended and its clients are finally being listened to. Although I would never consider going back to Tobias House for its services (or to any other attendant service for that matter) because I love, love, love having Direct Funding and being able to choose who works for me, I am overjoyed with this new development and hopefully other attendant services will follow suit.

Another positive development has been the anti-poverty group formed recently by ARCH and Studies in Disabilities. I've been to 3 meetings so far that they've hosted, and they seem to have a lot of ideas and enthusiasm. Admittedly, I was rather disappointed that more people with disabilities didn't come to the latter 2 meetings and that the goal this group has set to "End Poverty" is 2010. In my humble opinion, 2010 is way too far in the future! ODSP and Welfare need to be raised to a living wage now not in 2 years! People need more money to pay their rent and buy nutritious food.

Email ThisBlogThis!Share to TwitterShare to FacebookShare to Pinterest
Labels: Changes Both Good and Bad


Our customer base appreciates our services and VIP demonstrate Islamabad Escorts  and Escorts in Islamabad. Consumer loyalty is our best need. We have dependable organized our customers gigantically.