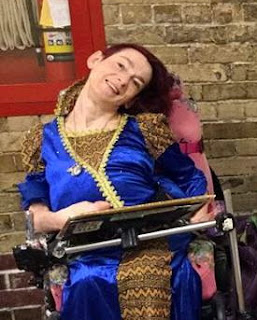 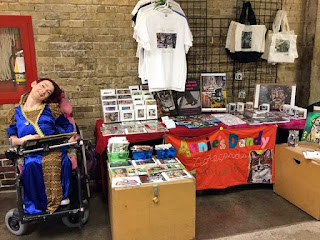 On Saturday I dressed up as Anne Boleyn, Queen Consort to King Henry VIII of England.   Some people knew this historical figure, but many did not. So, I had to recount the tale many times during the day.

Tonight, because it's Halloween, I'm dressed up as Anne Boleyn once again.  So, I thought I'd retell her history here.  It may or may not stop people from asking Anne Boleyn who? 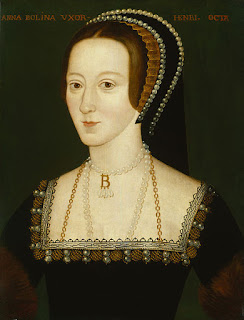 Anne lived from 1501 to 1533, making her only 32 when she died.  If she hadn't met good ol' Henry she might have lived longer.  But Anne lost her head over Henry - literally!

Because 1) Henry had gotten her sister Mary pregnant and then dropped her like a hot potato afterwards, and 2) Henry was still married to Catherine of Aragon, Anne rejected his advances at first.

However, because Henry kept pursuing Anne,she basically challenged him and said no sex until you divorce your wife and make me your queen.

Out of love/lust for Anne, Henry attempted to do just that.  I say "attempted" because Pope Clement VII refused to grant him a divorce.  In ordinary circumstances this might have been possible (royalty at that time could get divorced in the blink of an eye), but the pope's hands were tied because Catherine's nephew was the Holy Roman Emperor whose army surrounded the Vatican menacingly.

Henry and Anne got married anyway. The pope, of course, excommunicated Henry, but Henry basically said, Fuck you - I'm going to start my own church and do whatever I want!  Plus, all of my people will agree with me that my first marriage was a sham. True to his word, Henry founded the Church of England and orchestrated an annulment to Catherine.  And, because he was such a powerful schmuck of a king, practically everyone agreed with him, and those who didn't simply kept quiet.  (Except for Thomas More, but that's another story ....)

Nine months later, Anne gave birth to a girl named Elizabeth, who later became Queen Elizabeth I.  There was much pressure for Anne to produce a male heir because, like any patriarchal society, males were/are viewed more valuable than females.  Unfortunately, Anne never produced a male heir, but kept having miscarriages.

Because of this fact, or perhaps because after three years of marriage the bloom had fallen from the rose, Henry's eyes began to wander to one of Anne's ladies in waiting named Jane Seymore.  Fearing history repeating itself, Anne naturally objected and Henry resented her jealousy.

Things went from bad to worse.  Sensing the king's displeasure, Henry's advisors poured poison into his ear and made him believe that Anne was sleeping around with multiple men.  They even  accused poor Anne of  practicing witchcraft.

Then came the shit show.  The men who were accused of having sex with Anne (including her brother George!!!) were tortured until they confessed, and then they were put to death.  Anne, to her credit, denied all of the accusations to the bitter end and professed her love to Henry, who very kindly ordered the best swordsman in France to cut off her head.

Email ThisBlogThis!Share to TwitterShare to FacebookShare to Pinterest
Labels: Anne Boleyn Who?