Speaking Out Once More for Our Rights 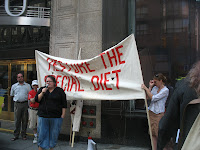 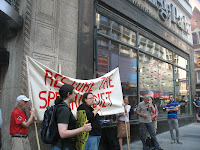 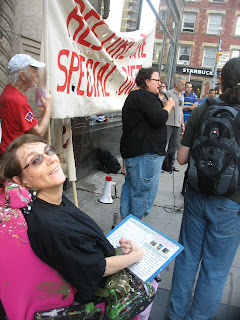 The following is a speech I gave today, August 30th, outside the Provincial Courthouse about the arrests on July 21st of myself and ten other activists at the Ontario Liberal Headquarters. The event was called as a press conference, although only one media representative showed up towards the end. I guess violations of our rights to freedom of expression are so commonplace now that they don't count as news. (Even at the last press conference I got the feeling that the media weren't really interested in the issue of the Special Diet, or our rights being trampled on, but more about the sensationalism of on OCAP "leader," and a disabled woman, myself, being arrested.)


During the G20, we only wanted to voice our outrage at the ableist government for taking away the Special Diet and not listening to us. Our protests were met with violence and blockades.


Then when we once again demonstrated against the unfairness of the government taking away our money, we are met with overreaction and arrests.


The charges should be dropped against our people!

Freedom of expression should not be penalized; the government is supposed to be working for us, and we need to be able to bring them our concerns and hold them accountable in their offices. We only seek justice and freedom and respect from our government. We won't accept that they turn us away with police and ridiculous accusations. 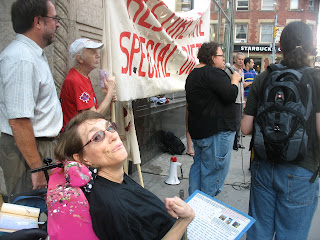 Email ThisBlogThis!Share to TwitterShare to FacebookShare to Pinterest
Labels: Speaking Out Once More for Our Rights